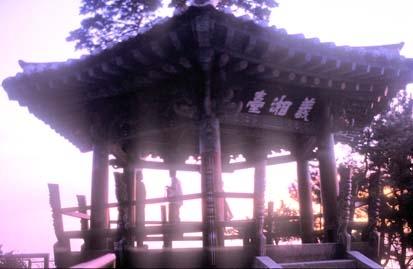 Uisangdae Pavilion, at Naksansa Temple. is a great place to see sunrise. 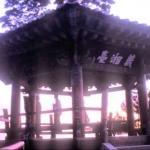 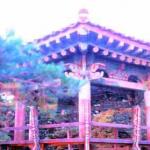 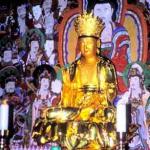 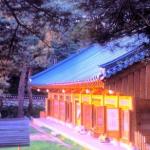 Naksansa Temple, in South Korea’s Gangwondo Province, is a mind-blowing place. Perched high on the slopes of Mount Naksan, Naksansa Temple hugs the eastern seashore of Korea like a jewel washed up on a sand-dune. This sublime and otherworldly retreat now welcomes guests for short stays, offering a powerful insight into the monastic way of life.

After some intensive travelling, I was hoping for a lazy, relaxing rest at Naksansa Temple. As it turned out, this was not to be the case. Our day would begin at 3 am the following morning, with a full round of temple worship to be completed even before the roosters get their early morning wakeup call.

Naksansa is no ordinary temple. Mount Naksan is said to be Korea’s Potalaka Mountain, akin to the Potala in Lhasa, and home to the Bodhisattva (saint) Avalokitesvara. Also known as Chenrezig or Kwan-yin, Avalaokitesvara is a central figure in Mahayana Buddhism, embodying the idea of perfect compassion. A famous monk Uisang, who is said to have met the Saint in a cave on Mount Naksan in 671 AD, built a meditation hall (later Naksansa Temple) at the foot of the mountain, on the Bodhisattva’s instructions.

An evening arrival at Naksansa Temple is timely indeed. This allows time to change into the standard temple garb of green and gold tunic and trousers and partake of an evening meal – a tasty vegetarian buffet. Chilli-heads will be pleased to know that the national dish kim-chi (spicy pickled cabbage) features amply on the menu.

The Bodhisattva Avalokitsesvara (also know as Chenrezig or Kuan-Yin) is depicted in many different forms, sometimes with four, six or more hands. There are many statues and paintings in which Avalokitesvara has 1,000 hands, each with an eye, so that the Bodhisattva can see those in trouble and help them. Avalokitesvara is said to represent the ultimate in compassion within every person, and is sometimes worshipped in male form, sometimes female and sometimes as beyond all distinctions.

The day at Naksansa Temple begins early: at 12 midnight, to be precise. But knowing that I have to get up by 3 am makes me restless. I toss and turn like a chained soul awaiting the rail-car to salvation. Eventually, my fellow inmates and I stumble, groggy-headed, through the courtyard leading to the bell-hall.

At this time of day, say the Koreans, “the stars and the moon are looking down upon the world with a big smile”. But without a caffeine hit (I don’t have the change for the coffee vending machine in the courtyard), I feel it hard to raise even a little grin.

In the bell-hall, a small bell, a wooden drum and a fish-shaped gong are all sounded in turn, as if waking up the day. Then the awesome large temple bell, the Brahma Bell, is struck 28 times. According to tradition, “the sound, shaking heaven and overturning the earth, illuminates the minds of people and melts desire, greed and foolishness.”

Yebul, the early morning worship, then takes place in the Main Budda Hall. The chanting of sutras is followed by a set of 108 prostrations before the figure of Avalokitesvara. The first few prostrations feel like a particularly sadistic form of aerobics. But amazingly, I start to feel the grace of the Bodhisattva, and by the end of the set, am feeling like a gym-freak on steroids. This excessively macho feeling soon subsides, and I’m left with an overwhelming sense of peace.

Before breakfast, there is time for a walk down to Uisandae Pavilion, on the seashore, to take in a surreal sunrise. This is one of the best sunrise-viewing points on the east coast of Korea, so the place soon gets swamped with groups of schoolkids on tour. At this stage, it’s time to take a slow, meditative walk back up the hill to the main pavilion.

Breakfast at Naksansa is a special ritual, known as Balwoo Gongyang. Each participant is given a set four bowls in a wrapping cloth. The bowls than have to carefully unwrapped, and partly filled with rice, side dishes, soup and rinsing water respectively. After the chanting of prayers, the meal is then taken.

No talking, no food to be left over – and be careful not to get the procedure wrong! How am I to remember all these rules? I somehow stumble through the ceremony, manage to clean the food bowls with a piece of radish, drink the rinse water, and put the bowls back in their cover – and my hands haven’t even left the ends of my wrists. The whole aim of the ceremony is to teach respect for food and the need to avoid wastefulness – maybe this is a ritual that should be adopted at McDonalds.

Meditation class comes next – a procedure involving sitting in half-lotus posture while pondering the thought “who am I”? I can’t say that I arrived at any definite answers to this question. The sitting meditation is periodically interrupted by a walking meditation, presumably to break the sleep-habit – but by this stage, I’m feeling a little like a spaced-out zombie.

Any remaining feelings of tiredness are said to be banished by the Oolyuk or Wulruk (“community work”) period, which might involve sweeping the temple grounds. But on this occasion, I get out of doing the day’s chores. Maybe they can see that I am already in the terminal stages of rigor mortis, or maybe this is a concession to a perceived total flabbiness among Westerners.

Dabo, or the tea ceremony, is another important ritual of the day. “We drink tea not by our mouth but by our mind”, goes the saying. Tannin, caffeine and amino acids are said to be among the beneficial ingredients, “making the head clear and relieving fatigue.” On another level, the ceremony is designed to teach table manners.

The remainder of the day is a little more restful. A communal lunch is followed by a long walk around the temple grounds, with time even for a short nap before the evening meditation session.

After dinner, the second ritual bell-ringing for the day takes place – and on this occasion, temple-stay guests get to take part in the 33 rounds of the night bell ceremony. As the clapper is struck against the bell, a booming sound as though from the depths of the primordial universe seems to reverberate through space and time, calling the whole universe into being. It is possibly the most profound sound I have ever heard.

I later learn that this bell is known as the Brahma Bell. Whereas the morning ringing is for the benefit of human beings, the evening tolling is said to represent all beings in the underworld. According to tradition, this bell has the power to give relief to all beings in heaven and hell.

Maybe the sound of this bell reached some hitherto unknown depths of my body, or mind, or both. Whatever, the effect was profound. Along with many of the other course participants, I came away feeling that I had somehow been blessed with the grace of the Bodhisattva.

Getting There: ANA flies regularly from Tokyo and Osaka to Incheon International Airport, near Seoul. From Incheon, Naksan is about 4 hours by express bus (via the town of Sokcho).

Temple Stay Program: The Temple-Stay Program was first trialled during the World Cup in 2002. Since then the program has been opened to the general public. A number of temples, including Naksansa, now offer temple-stays. The cost is very reasonable.

Some useful background is at:

http://www.templestaykorea.net ; however, for reservations, it is best to contact your local office of the Korean National Tourism Association (in Japan, tel 03 3580 3941 in Tokyo or 06 6266 0847 in Osaka). See also: http://english.tour2korea.com/home/spotlights_read.asp?oid=99