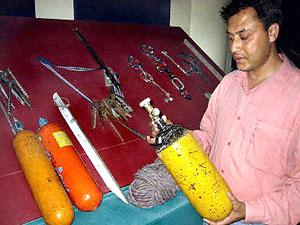 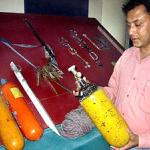 POKHARA, Nepal, May 23, 2003 - Lonely and forlorn, desperately seeking exhibits -- that's the pitiful tale of the International Mountain Museum at the foot of the majestic Annarpurna mountain range in northwestern Nepal.

Designed to showcase Nepal's role in international mountaineering, the museum so far hasn't managed to attract a single exhibit from the country's pride and joy, Mount Everest -- barring an oxygen bottle scavenged from the garbage heap at Base Camp. Expecting the three halls of the new museum to be filled with exhibits from across the globe, the Nepal Mountaineering Association (NMA) had planned a gala opening to coincide with next week's Golden Jubilee celebrations marking the conquest of Everest on May 29, 1953, by Tenzing Norgay Sherpa and Sir Edmund Hillary. With only enough artefacts to fill a small conference hall that adjoins the main halls, however, the opening has now been delayed until next February.

"Our main problem is that mountaineering clubs around the world who said they would send items have not done so," lamented museum project manager Nabin Ghimire. "We have sent out many appeals but so far only the French and the Japanese have responded. Many others said they will help, but we are still waiting."

The sprawling complex, which has been built at a cost so far of 60 million rupees (830,000 dollars), boasts three interleading halls -- the Hall of the Great Himalayas, the Hall of International Mountains, and the Hall of Exhibitions and Expeditions. All, however, echo with emptiness.

The first hall, Ghimire told AFP, is designed to display items from Nepal's famous Himalayan range, while the second would highlight other major peaks across the globe. The third is for special exhibitions. "We approached Edmund Hillary but he has already given most of his equipment to other museums around the world," Ghimire said. Tenzing Norgay's equipment is on display at a museum in the northeastern Indian city of Darjeeling, where he spent the latter part of his life heading a mountaineering school.

For the opening next February, Ghimire said, the museum hoped to persuade the Darjeeling outfit to lend out the Tenzing Norgay exhibition.

It also planned to have a special exhibit featuring Nepalese legend Babu Chhiri, who summited Everest 10 times without supplementary oxygen, in 1999 spent 21 hours 30 minutes at the summit, and who holds the record for the fastest time from Base Camp to the top -- 16 hours and 56 minutes. Chhiri died after falling into a crevasse while attempting an 11th summit in 2001 and is regarded as a national hero. According to Ghimire, a special exhibition featuring Chhiri was put on display in the then still-uncompleted museum in February last year to mark the UN's Year Of the Mountains.

"People in Pokhara kept asking us what have we been doing for the past five years, building a museum but putting nothing in it -- so we decided we had better give them something," he said. That exhibition attracted some 30,000 people in just two weeks, he said, proving there is great interest in mountaineering in this Himalayan kingdom.

Despite the slow start to the project, Ghimire believes it will in time become a major tourist attraction in Pokhara, which, nestled below Annapurna and set on the picturesque Phewa lake, is already on a well-trodden tourist path. He envisages media centres, a restaurant, a conference hall to be used for international get-togethers, educational projects and displays, and a coffee bar, gift shop and audio-visual centre being built on the five-hectare (12 acre) tree-lined stand near the town's airport, where the museum is sited.

For now his exhibits comprise mainly photos and a smattering of mountaineering equipment alongside some tables displaying agricultural items and implements used by ethnic communities living in the surrounding Himalayan highlands. "But one day the halls will be full of artefacts, there will be crowds of people here and the International Mountain Museum will be known throughout the world."