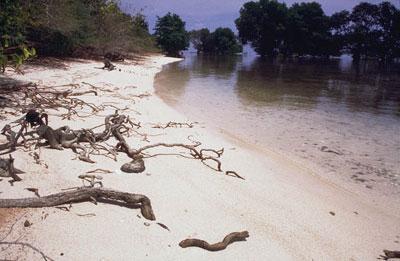 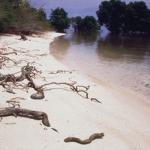 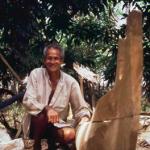 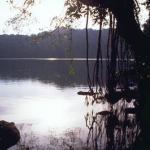 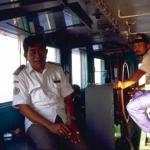 Throughout the Malay world, there survives a belief in the occult, the practice of which is the peaceful syncretism of local animism and the less orthodox Islam brought by Arab traders seven hundred years ago. Bawean Island practitioners of magic called dukuns have a reputation for being particularly skilled. I would have accepted their supernatural intervention in avoiding the nine-hour voyage by cargo ship to get there--a mere speck in the sea north of Indonesia's eastern Java.

Bawean's size belies its significance in Southeast Asian history. The islanders' hard work ethic found deep appreciation in nineteenth century Singapore. Today, Baweanese comprise the second largest ethnic group of Singapore's Malay community, one of whom invited me along on his next visit home.

Once aboard the rusting 2,000-ton vessel, my host suspended a hammock and went to sleep. Captain Mundiari courteously offered me his cabin for the night crossing but as the K.M. Pratini shuddered through rough seas and stars rocketed between black sky and blacker water, I opted for a plastic chair on deck where I could hang my dizzy head over the railing. Sympathetic crew squeezed by me on their trips to and from the wheelhouse.

All traffic to Bawean moves through its main town and port, Sangkapura. Many Baweanese men are sailors, on large and small vessels across the Indonesian archipelago and beyond; shipbuilders of aged hardwood supply boats called prahu; or fishermen, captains of tiny crafts called gukongs that are unique to Bawean, with white bodies, brightly painted prows and two supporting arms like a catamaran's. In 1969, a gukong sailed safely to Singapore and back, a distance of 1,400 kilometers, a success viewed superstitiously by its solitary navigator who became a dukun upon his return. Many haven't been so fortunate--the sea is a constant, reckoning force in the lives of an island culture. It didn't seem implausible to me, colored as my theory was by motion sickness, that Baweanese consider magic a necessary means of survival.

Bawean means "sunlight exists" in Sanskrit, which is what fourteenth century shipwrecked sailors reportedly exclaimed upon seeing it under clear skies after days tossed about in stormy seas. At three in the morning, my first sight of Bawean--a roller coaster silhouette on a bobbing horizon--made its less romantic name of Big Mountain Island more meaningful, a reference to the ninety-nine hills that occupy its 200-kilometer length. On the summit of one, I imagined the animist King Babileono to have sat in power-rejuvenating meditation.

Not much is known about King Babileono. Documented history of Bawean begins with the arrival in the sixteenth century of Umar Masood who overthrew him. Both men used sorcery against each other, but Masood's magical feats were made possible by God. This assured him of victory and a thirty-year reign during which his subjects embraced his new faith of Islam. Masood's legacy is the 186 mosques on Bawean, at least one in every of its thirty villages and the religious instruction that begins earlier than government schooling for Bawean children.

There is no better guardian of the past than sixty-year-old K.H. Abdulrachman, the fifteenth descendant of Umar Masood, who lives in Sangkapura not far from where his revered ancestor is buried. His Bawean history, compiled in 1985 for the benefit of returning emigrants and their families, is an invaluable resource. Like Masood, he is a qualified disseminator of Islam as denoted by the distinguished title of Kiayi Haji that prefaces his name. His religious practice also reflects the ancient belief of prayer as power activated by divine words, the white as opposed to black magic used to an advantage by Masood and today as an antidote for sickness or to remove bad spells cast by malicious persons. During the recounting of his family's story to me, a message arrived that someone was ill and needed his urgent help. He excused himself but didn't go to the patient. He never left the house. His prayers traveled instead, when he blew gently upon a glass of water that he had inspired by intoning Koranic scripture.

Nominally secular, Indonesia has the world's largest Muslim population. The religion's historical stronghold is Java from where, legend has it, nine holy men or walis, helped further its expansion. One of these men may be buried on Bawean Island. It is more certain that the wife of one of the famous walis renounced her privileged life on Java for one of piety on Bawean. There are myths of Waliyah Zainab's miracles--her rice bowl was never empty and her water pitcher always full to feed and quench the thirst of her many disciples, magical implements that are exhibited behind her shrine in Bawean's Diponggo Village. To this day villagers speak the form of Javanese that Waliyah brought with her and not the Baweanese or modern Indonesian languages. Overseas Baweanese come to thank her for their safety and prosperity. That her grave has become an important pilgrimage site for men (those most likely to leave the island) is one of those perplexing gender subtleties of Islam. Waliyah adopted the religious life only in rebellion when her husband took a younger second wife.

Divorce is a Baweanese woman's prerogative as well as a man's. Many Baweanese women are married but alone, deciders of their fate, because their husbands are away for years, working. Men become "lost" said a family court lawyer, who settles about fifteen divorce cases a month in his Sangkapura jurisdiction. Because women often outnumber men, a local writer called his early 1990s book about Bawean "The Princess Island." The royal label infers more choices than are available to the women who heed the religious dictates and customs that govern society. Their role models for independence are religious women. One of them complimented me when she said at my departure, "If you return to us as a religious teacher, you will have many followers."

When the K. M. Pratini docked at Sangkapura, the first prayer call of the day had begun. We drove north along the east coast to my host's village, his father's birthplace, along one of Bawean's three roads. The azan pursued us, each mosque staggering its beginning so that the summons surged and faded in tandem. From my seat in the back of the truck, I glimpsed pastoral beauty in the strengthening light--harvested rice paddies, swaying coconut palms and drifting fishing boats anchored off sandy beaches.

Bawean is not undiscovered: At any one time, a few dozen private sailboats anchor in sheltered bays and Balinese tour boats periodically discharge passengers on day trips, primarily to visit Danau Kastoba, a large lake where it is said that King Babileono conjured his charms. About twenty Asian tourists a month come to a mangrove forest--called White Beach for its pristine sand--to fish. The master gukong maker has accepted western students. In comparison, however, to the eastern Javanese city of Surabaya, where the use of small hand-held stop signs hanging at intersections are necessary to cross the street, Bawean remains a world apart, the 75 nautical miles a buffer between it and the outside. Baweanese attribute this cultural autonomy to their magic. They maintain that even Dutch colonizers failed to exploit the island--their repeated attempts to extract gold from the island's mine all meeting with tragic accidents. The elders who remember the mine's location will not disclose it for fear of spiritual retribution. A less paranormal indication of Bawean's seclusion was the visit I was paid by the island's suspicious representatives of Indonesian police.

In my Surabaya hotel room, the evening before my departure for Bawean, I had watched a female entertainer on television, dressed less conservatively than I, while in the screen's upper corner a little beating drum signaled a prayer call. In the Baweanese towns of Sangkapura and Tambak, acceptable attire did not include a headscarf. In my host's simple village of devout farmers, where the daily rhythm revolved around prayer times, I covered my head like every woman. It was hot beneath the scarf and difficult to keep in place while I moved about. A veil is not only an article of religious respect, but also enhances a woman's beauty. My host's housekeepers, in whose care I was placed, took me to the market to purchase a scarf more becoming than the one I had brought and two of finer material for them. They wore them with pride the day I departed and I was aware that when I removed mine, in their eyes I diminished my femininity.

The headscarf also concealed my differences. At night, the village women gathered at my host's house for prayers, hour-long recitations of the Koran that became anticipated performances during my visit. Some were surprised at first that I didn't know the Arabic passages, but as the week went on, they took their leave of me with a single hand raised to their breast in the Malay gesture of respect. Among them lived a centenarian, a woman of such fragility that I could encircle her forearm with my fingers. Yet she lived alone, a widow for decades, in the last mud-floored attap hut of its kind. She was my host's grandmother and I was the first Caucasian woman that she had met.

When Lake Kastoba was King Babileono's domain, it was taboo for women to set foot there. One acted as my cheerful escort, along with her husband and five of their nine children, who wanted to picnic and fish. We abandoned the truck after thirty minutes and climbed a steep hill, stopping to introduce me to curious residents who, back from their rice, peanut and cassava fields, rested on attap-surfaced wooden platforms outside their houses called dhurungs. Cultivated fields alternated with teak forests; Baweanese substitute the tree's dinner-plate sized leaves for paper and plastic to package fresh produce at the markets.

Baweanese folklore maintains that Lake Kastoba was formed by a genie pulling up a tree. Others say that a special tree stands by the lake, its bark eternally free of moss and its falling leaves and branches disappearing before reaching the ground. The lake was a perfect setting for sorcerers: its thick surrounding vegetation dripped creepers and small fruit bats kissed its inky surface. We stayed for sunset, the children engrossed in their play. The photos that I took of this happy time were all inexplicably overexposed. I was not the first disappointed photographer. Professional cameramen, hired to photograph the lake from the air, gave up when film after exposed film remained mysteriously blank.

Upon my return from the lake, I felt a sudden ache in my knee that mystified me. The walk hadn't been strenuous or difficult. I was still favoring one leg when I boarded the K.M. Pratini for Java. The captain and I greeted each other like old friends. He nodded knowingly when informed of my discomfort. Someone, he said, wanted me to stay longer on the island.

The Shan States of Burma: Toyotas, Traders, and tribes