Kidapawan: The City of Highland Springs 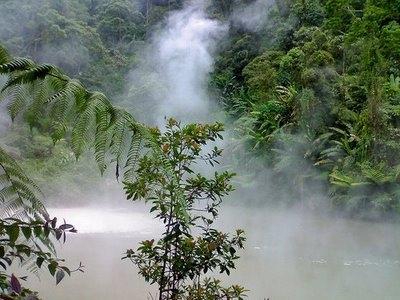 Kidapawan's hidden eden-Lake Agco situates itself at the foot of Mt. Apo, a steaming blue lake where hot and cold springs meet 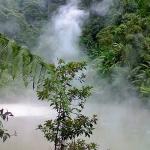 Steering through the upland regions of Bukidnon to the highly elevated vicinity of North Cotabato can be the most tedious journey I’ve ever done in Southern Philippines. The vast land area, long and winding trail had taken us 7 hours to reach the intended destination. Such a wearisome travel was later exchanged with excitement, as we arrived in the city being warmly treated by intimates who, too, were part of the important visit.

Situated off the central part of Mindanao, Kidapawan sits as the capital city of North Cotabato and is one important destination in Southern Philippines. Apart from rich cultural heritage, the city itself provides complete amenities to visitors: cheap hotels, amusement centers, shopping stores, among many others, and is called the “fruit basket” of the country because of its abundant exotic fruits.

But the main come-on to visitors (especially during months of October to December, including summer) is the exceptional “Mt. Apo”—the country’s highest peak where thousands of travelers regularly climb to explore. Kidapawan City well places itself at the foot of Mt. Apo which opens its doors to the world and likewise makes the province of Cotabato a prospective world-class tourist destination.

Mount Apo, according to published sources, stands an altitude of 10, 311 ft. It is flat-topped, with three crests, crowned by a 500-meter-wide (1,600 ft) volcanic crater holding a small crater lake. Moss-covered century-old-trees, alluring flora and fauna, sulfur craters and massive boulders surround the majestic mountain. It also serves as a habitat of the now endangered Philippine Eagle.

Innate mountain spots which can be seen in Kidapawan are the Marbel Falls; the Mawig Falls in Balabag; the Lake Agco; the Lake Venado which is hidden among the mountain ranges and has an elevation of 7, 200 ft (above sea level); and the Mandarangan Geological Site—a major educational tourism site within the Natural Mt. Apo Park. The Lake Agco bumps itself up at about 4, 200 ft (above sea level). It is approximately 5 kilometers from mountain trekkers’ start-off site at Barrio Ilomavis, Kidapawan City.

Transportation going to the city’s hinterland barrios is served by “tricycles”—a modified passenger motor vehicle (also known as “motor cab”) prevalently used in the Philippines for local transport. Using a rent car or bringing your own private vehicle (as what we did) is much preferable for a comfy ride. A trustworthy guide, too, of course is very necessary.

Travel experiences I spent in Kidapawan were very much unusual (“strange” as I call it) because it blended memorable time with sociable people on a religious organization, which I never did before. I, too, went there to visit a friend who was going to have his investiture as new parish priest of Bulakanon in the Municipality of Makilala, North Cotabato (about 30 minutes away from Kidapawan City), yet I did have lots of adventure, escapade and fun. I’d traveled a long way with friends, including my sister and my brother-in-law.

The town owns a very simple milieu and lifestyle, pacific with pristine air where rubber and fruits thrive. Wide, spacious green fields caught my attention next as we drove through a narrow, lengthy road heading to Bulakanon’s community church. Proel, Joel, Kid, Francis and I then met with Fr. Jay where the good priest treated us with lavish meals, fruits, and drinks—along with other clerics, nuns and friends attending such an important Sunday.

We 5 wanderers with Fr. Jay also had a sumptuous dinner at the residence of one respected parishioner, who generously provided us native foods, fruit shakes and drinks. Perhaps the most pleasing scene of the place is the warm hospitality the people of Bulakanon have possessed.

The remaining days gave us enough time to go back and rove around Kidapawan, visit a convent and a monastery, hang out in to some nighttime pubs, play bowling, and do some sightseeing.

Some recommended establishments ideal to stay in at the city include the “AJ Hi Time Hotel and Restaurant”; the “Mount Apo View Inn”; “SAM’s Guesthouse & Apartelles”; and the “Grand Ficus”. There are a number of department stores, fast food shops, communication facilities in the vicinity and internet cafés as well.

The city’s simplicity and rich cultural legacy give Kidapawan a down-to-earth splendor.