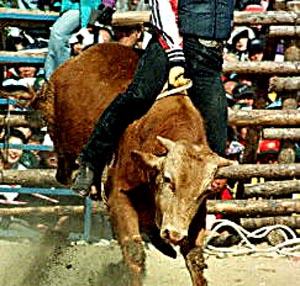 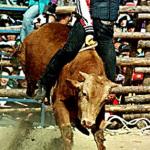 CHEONGDO, South Korea, March 28, 2005 - With steam pouring from their nostrils and hooves pounding the sand, the two prize bulls square off warily, then clash head-on like freight trains.

There is plenty of blood and guts on display in Korea's own version of bullfighting that draws crowds of thousands to this rural community, the center of the sport in the southeast of the country.

But unlike Spanish bullfighting, there are no matadors, no swords and capes and no killing of any kind.

Sinews and muscles bulge as the beasts lock horns for more than 20 minutes while handlers holler at the top of their lungs urging the animals on.

"Stab it, Bumyong, stab!' cries the rival's handler as the beasts weighing 750 kilogrammes (1,650 pounds) clash on the sandy ground ringed by a wooden fence.

With Bumyong showing signs of exhaustion, panting heavily, and dribbling from his mouth, Heryong swiftly turns sideways and frees its locked horns to lunge freely at the flank of Bumyong.

With a jolt, Bumyong turns tail and speeds away to the cheers of thousands of spectators, bringing the bout to an end and handing a three million won (around 3,000-dollar) cash prize to the owner of the winning bull.

Heryong is one of 13 bulls who leaves with a prize from the annual bullfight festival held each March in Cheongdo, a farming village 350 kilometers (220 miles) southeast of Seoul.

The Korean bullfight traces its roots back hundreds of years to farming communities where bulls were the farmer's prize possession and status symbol and fights would decide who should get to use best grazing grounds.

In modern times, the tradition continues in the southeastern provinces of North and South Gyeongsang, and bullfights have been attracting an increasing numbers of spectators.

A total of 104 prize bulls who made it to quarter-finals in other events were invited to the elite Cheongdo tournament.

The winner and his handler are acclaimed by their supporters, all from Heryong's home village of Topyong, who danced to the tune of metal gongs and hourglass-shaped drums of a traditional farmers' dancing band.

"We all came here to cheer Heryong. I'm quite pleased at the victory," says Oh Seung-Gon, 57-year-old chairman of Topyong Village council, as other villagers clean the bull's mouth and nose of blood and gore with a can of bubbly soft drink.

It is clear that Heryong knows well enough that he is the winner. Like other champions on display here, he holds his head high and lets rip with ground shaking roars. Losers, heads lowered, generally trundle towards the exits and slip way in silence.

Each match begins when two bulls are led by their handlers to the centre of the ring. The beasts are on edge and blow hard from their flared nostrils while stomping the ground.

As the judge wearing a blue and red shirt blows the whistle, the handlers let go of the nose strings and the bulls immediately square off, clash heads and lock horns.

There is no time limit and fights end only when a bull gives up and turns tail. Some matches last an hour or longer but deaths or fatal injuries to the bulls are rare.

For followers of bullfighting, the Cheongdo festival ranks as the national championship.

Only top bulls can take part and they are classified into three weight categories, with Kap class weighing 750 kilogrammes and above, Ul class between 650 and 750 kilogrammes and Byong class below 650 kilogrammes. Each class has four or five finalists and there are no play-offs among the winners because they have already fought two contests to reach that stage and more fights would expose them to further risk of injury.

There is no particular breed of prize fighting bull. Competitors are selected from ordinary Korean bulls with light brown hair and short but sturdy horns curving gently forward.

Stamina food is prepared before matches, recipes of which vary in accordance with handlers.

"Some bulls are treated to expensive herb tonics. Others enjoy mudfish and live octopus," an official of Cheongdo County says.

Ringside betting on bullfights used to be illegal but following a strong lobbying effort by bullfight organizers, South Korea's National Assembly in February last year passed a law legalizing the practice. Now Cheongdo County has started building what it claims is the world's first bullfight arena with a domed roof that can open and close automatically. However, work was suspended last year when the construction company went belly-up.

"The construction work will resume soon by another company. We expect it to be completed by the end of this year," says a spokesman of Cheongdo County of the 80-million-dollar structure with 12,000 seats.