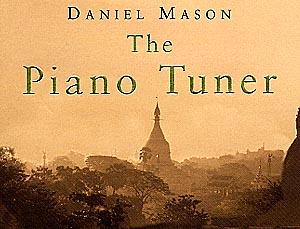 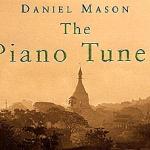 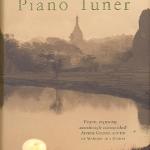 Frankly my first instinct upon inspecting Daniel Mason's novel The Piano Tuner was to throw it across the room and maybe even kick it around a bit. A simple case of writer's envy, for Mr. Mason graduated from Harvard in 1998 with a degree in -- biology! Biology. And now he is a student at the University of California at San Francisco, the Harvard of med schools. No doubt Mason is finding time between Epidemiology and Oncology to dash off more critically acclaimed novels about -- 19th century Burma! Ha, ha. Ha.

Mason apparently wrote much of the novel while he was researching malaria on the Thai-Burmese border, a place as enchanting as it is volatile. Parts of the text have clearly been written by a first visitor to Asia, who is so overwhelmed that he slightly loses his head. This is appropriate, however, because the novel concerns one Edgar Drake, a British piano tuner commissioned by Her Majesty to travel to Burma in order to restore the instrument of one Surgeon-Major Anthony Carroll, a Kurtz-like figure who has established a small empire in the Shan states of Burma. Nor is Carroll the only similarity with Conrad's Heart of Darkness; even Moore's style sometimes becomes breathlessly Marlowesque.

The story begins in fin-de-siecle London, where industrialization has brought a great deal of squalor. We meet absent-minded Edgar and his loving wife, who unexpectedly encourages him to accept the commission even though it will entail a three-month separation. Edgar travels by the customary route, through the Suez Canal and on to Aden and Bombay, whence he journeys overland by train. Once in Rangoon, he learns that Carroll's fort in the fictional village of Mae Lwin has been attacked and is therefore off-limits. In Rangoon he meets Khin Myo, a beautiful and sophisticated Burmese woman who speaks excellent English and is somehow connected to the Surgeon-Major. This is the obligatory love interest. Little does Edgar know that the woman's overtures conceal some larger design.

Edgar's first mistake is to travel to Mae Lwin upon Carroll's request and in direct contravention of the British military. On the way he is beset by dacoits, whose mischief is one of the main reasons for the presence of British garrisons. Another reason is that the Shan -- ethnically related to the stubbornly independent Siamese -- have yet to submit to the Imperial yoke. (Today the Shan are little more cozy with the Burmese government.) Edgar survives, and at last meets the eccentric soldier-surgeon toward whom the British in the capital feel a mixture of admiration and abhorrence. Carroll turns out be far less enigmatic than was Kurtz, or so it seems at first. But they share several qualities, foremost among them the steadfast allegiance of the local people, for whom Carroll is practically a demigod. After all, he cures the sick. Moreover, he owns what the village children call the "singing elephant" -- the piano, an Erard Grand.

Edgar tunes the piano. Mission accomplished. But then something strange happens. Days pass and he has very little desire to leave Mae Lwin, especially as his intimacy with Khin Myo grows. So it is hardly surprising when Carroll sends Edgar a passage from Homer's Odyssey referring to the Land of the Lotus-Eaters, the stop on Odysseus's itinerary that no one ever wants to leave. (Carroll had recently begun to translate the Odyssey into Shan, a close cousin of Thai.) At this point Carroll cuts a tragic figure, as a man battling to preserve himself in a place he had never intended to adopt as his home. "Perhaps I stay," he says, "simply because I cannot leave." Like Edgar, he was sucked in. As someone who has tried to leave Asia several times and always returned, this rings true to me. The ramifications, in light of the novel's unhappy conclusion, are admittedly rather chilling. But it would be just as easy to get sucked into, say, San Francisco. To say otherwise is to exaggerate Asia's allure, as if it were a giant carnivorous jungle with an insatiable appetite for gullible European men. Edgar's second mistake -- not counting his trust of Khin Myo -- is to accompany Carroll to a meeting with some tribal leaders, and to do so under a name belonging to an actual British official. He does this reluctantly, thinking it treasonous, but he ultimately submits to Carroll's uncommon charisma. The consequences are bad -- the worst -- and as the true identity of Carroll is revealed, so too is the enormous scope of Edgar's naiveti.

To Mason's great credit, the novel's Burmese characters are believable and likeable, when so often Asian characters are introduced simply to add an element of inscrutability or danger. He has resisted the temptation to have them speak in idiotic English, and in his portrayal of Khin Myo he has shown how Asians commonly hide their most admirable qualities. Edgar is startled by her proficiency in English, and only well into the book does she confess that she is of royal lineage.

All of the characters in the novel are sympathetic. Pulling this off is more difficult than it sounds. Orwell's Burmese Days, for example -- whose depiction of the pwe, or Burmese street theatre, is elaborated upon by Mason -- was populated mostly by scoundrels and fools; the two books could scarcely be more different in their attitudes toward the Raj. In The Piano Tuner it comes across as fairly benign, save for the needless murder of a Burmese child by a British hunter in the novel's early stages. When Edgar tells Khin Myo that the Raj has done a lot of bad things, Khin Myo replies that it has done some good things too, and she is probably not just thinking about exposing the Shans to Bach or Chopin. But she also humbles the Empire somewhat when she says, "I think perhaps it is the error of the ruling to think that you can change the ruled." Burma's leaders before the British were themselves hardly models of benevolence; its leaders now are not only cruel but daft. (I am thinking in particular of the late Ne Win and his decision to change denominations of Burmese currency so that they were all multiples of his lucky number 9.)

One respect in which the novel disappoints is that its descriptions of both scenery and actions contain the occasional longueur, almost as if the author were describing a movie playing in his head. ("Straightening his shirt and brushing his hair to the side with his fingers, he followed the boy downstairs.") Dialogue is often condensed into paragraphs with no separation between the words of different speakers, so that it is often difficult to tell who is speaking, especially when Edgar is being interrogated by an impatient British officer.

Having never been to 19th century Burma, I cannot say how faithful Mason is to it, but he does evoke the Southeast Asian tropics as well as anyone, save perhaps Conrad or Han Suyin. But when he writes that in Bombay Edgar saw "crowds such as he had never seen, not even on the poorest streets of London," he may be confusing the 19th century with the present day, for at the turn of the century Bombay had about a million people, while London had over six million. And sometimes his British characters do not sound quite British enough. Instead they sound like eloquent Americans, despite the occasional "chap" or "bloody". But he is splendid when it comes to the extremely florid English spoken by some Indians and Burmese.

These are but small deficits of an otherwise well researched book. We are told for example that the Vedas, composed about four thousand years ago, "implicate the lowly mosquito" -- correctly -- as the vector of malaria. And that there is a Shan saying to the effect that people die when they have done all they were supposed to do, which is a great deal more consoling than death-as-excess-of-hydrogen-ions (as Mencken once put it.)

First novels have a way of attracting more adulation than they deserve, in part because of our culture's abnormal fascination with what is new as apart from what is good. The Piano Tuner is indeed impressive, but it is unlikely to outlast the giants of literature about Southeast Asia. Engrossing though it is on a first read, it does not exactly beg for a second. Like a Chopin nocturne, it brings us to a place we have never been before, a place of riotous sights and emotions that, once experienced, is better recalled than revisited.