The Non: National Headgear and Symbol of Vietnam 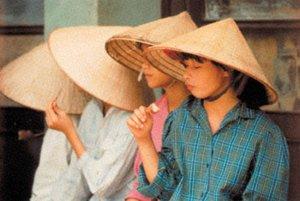 Along with the graceful silk ao dai, the non has become a sort of informal Vietnamese national symbol recognized worldwide. 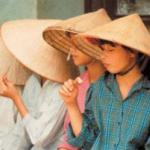 In my travels I've noticed that every country has its own national headgear. The United States has the baseball cap, of course, and England the London bobby's helmet. Greece has the fisherman's hat, and France the beret. Israelis have the yarmulke, and the Saudi Arabians their white headdresses. Indian Sikhs wrap their heads in elaborate turbans while Russians warm their craniums with fur hats good to fifty below zero. In Vietnam the national chapeau is without question the non, or conical peasant hat. Along with the graceful silk ao dai, the non has become a sort of informal Vietnamese national symbol recognized worldwide.

Nobody knows when the first non came into fashion in Vietnam, but doubtless it dates back to the region's earliest civilizations thousands of years ago. The ingredients, after all, remain quite basic--bamboo and palm leaf-and the need for a sunhat would have obviously paralleled the first cultivation of rice. The non has been around a long time, and this distinctive hat may well be one of the most timeless aspects of the Vietnamese landscape.

Today the non is made throughout the country, from Hanoi to Saigon. Different regions put their own spin on the basic non design. The non of Hue remains famous for its lightness and supple thinness. The central province of Quang Binh makes its own Ba Don non, which is a sturdy version inlaid with elaborate decoration. The different countries of southeast Asia, in fact, have all designed their own unique versions of the basic palm-leaf hat. Thai women, for example, favor a palm-leaf hat that resembles an upside-down basket.

In the northern province of Ha Tay, the town of Chuong devotes itself almost exclusively to the production of non. Located near Hanoi, Chuong is, so to say, the headgear capital of Vietnam. The community makes a number of designs, including the non dau (the smallest model), the non quai thao (a flat design), the non thung quai thao (a larger version of the flat design) and the basic non.

Non have long been the community's traditional product and they are marketed throughout Vietnam. An estimated 3,000 families--80 percent of the community--are involved in the hat-making industry. Often village roads are completely covered with bright green palm leaves, which villagers have laid out in the sun to dry. The process is relatively simple: the leaves are dried, whitened, stitched into bamboo frames and given some decorative touches. It takes five to six hours to craft a basic, no-frills non. When sold in a typical town market, a non might turn a 5,000 dong profit (US$0.40).

Fortunately for the town of Chuong and other non producers nationwide, the hat has gained popularity among western tourists. These visitors to Vietnam buy the hats as souvenirs, as decorative wall-hangings, and of course, as highly effective sunhats. I frequently saw these hats, often embellished with complicated decorations, for sale wherever foreigners shop. These simple peasant non always struck me as being slightly out of place in the Rex Hotel giftshop or Tan Son Nhut Airport duty-free (which also sells such intriguing items as dried seahorses, pickled snakes and giant scorpions). The markups at such exclusive shops generate a profit far higher than 5,000 dong, of course. If you want a basic non at local prices, go to the market and bargain with a wide smile and a mule's stubbornness. You still won't get the local price, but with persistence you can come close. But I guess any price is a bargain. After all, taking home a non is like taking home a piece of Vietnam.