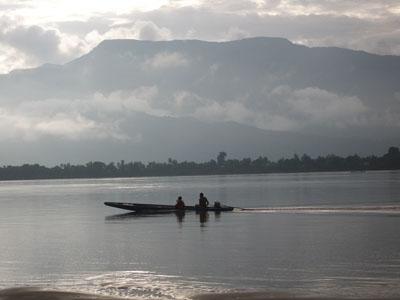 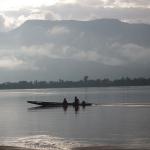 The Mekong River is one of the world’s greatest bodies of water. It is the world’s 12th longest river and 7th longest in Asia with an estimated length of about 4350 kilometers. It starts from the snowy Tibetan Plateau and runs through China, Myanmar, Laos, Thailand, Cambodia and Vietnam where it finally pours into the Mekong Delta.

The Mekong basin is one of the world’s richest areas in terms of biodiversity, even richer than the Amazon in terms of per unit area. There are over 1200 fish species identified in the river, with as many as 1700 estimated to live in the waters. The river also boasts some of the most diverse big fish species in the world. The Giant River Carp, which can grow as long as 1.5 meters and weigh as much as 70 kilograms, makes its home here. The Mekong Freshwater Stingray (wingspan of over 4 meters and weighing as much as 500 kilograms,) Chao Phraya Giant Catfish, Siamese Giant Carp and the Mekong Giant Catfish (all can grow up to 3 meters and weigh 300 kilograms) make their home in the river. It is to no surprise that the people living around the Mekong River basin depend on fishing as a way of living. The rare Irrawaddy Dolphin and Siamese Crocodile also call the Mekong River home.

The Mekong River is one of the hardest to travel on. The extreme seasonal variations and waterfalls in this river have made navigation extremely difficult. So the river has actually divided the people living around the river instead of uniting them.

Archeologists have estimated that there were settlements living there dating as far back as 2100 BCE. Early civilizations included the Funan (1st century AD), who were then proceeded by the Chenla (5th century AD). The Angkor Empire then took over and influenced most of the area until the Kingdom of Siam and the North Vietnamese followed suit.

The first European to encounter the Mekong was a Portuguese man named Antonio de Faria in 1540. There was not much interest in the river from the Europeans because of its navigational difficulties. However, French interest in the region intensified in the mid-19th century and eventually proved useful as a means of connecting the various countries in the Indochina region.

There are several border crossing bridges over the Mekong River connecting Thailand and laos. The Thai-Lao Friendship Bridge connects Nong Kai in Thailand to Vientiane in Laos. The 1170 meter bridge has two lanes for cars separated by a railway in the middle and was opened to the public on April 8th 1994, making it the first bridge to cross the lower Mekong. The Second Thai-Lao Friendship Bride which opened on January 9th, 2007, connects Mukdahan in the Isaan region of Thailand to Savannakhet province in Laos. A third bridge connecting the two countries should be completed by 2011.