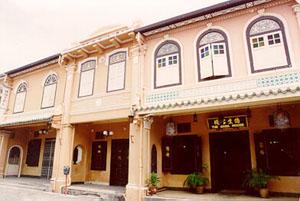 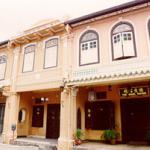 In the early fifteenth century, a beautiful princess from the Chinese Ming Dynasty, Hang Li Poh, arrived in Malacca to be presented as a bride to the Malacca Sultan. Part of her entourage included five hundred youths and several hundred women attendants of noble descent, to wait on her and keep the princess company in her new home.

This entourage settled down in Bukit China in the Malay Archipelago, eventually inter-marrying with the local Malays. The mixed marriages marked the beginning of a new generation of people in Malaya, the Peranakans or Straits Born Chinese.

Later on, early Chinese traders from the Kwantung province in China intermarried with local Malay women, adding to the population of the Straits Born Chinese.

Theirs is a heritage unique to Southeast Asia, a mixture of Malay and Chinese cultures with a dash of the English way of life.

In their heyday, the Babas and Nyonyas were wealthy and influential people in the business world. This is evident in their jewelry costumes (sarung kebaya), shoes and embroidery pieces, items of refined workmanship highly sought after by art and antique collectors.

The Baba's traditional costume is a Chinese dress, with intricate embroidery sewn using gold thread. The ladies wear sarung kebaya, a heavily embroidered Malay-style tunic with a Western style long skirt. They use silver ornaments like kerongsong (broaches), hairpins, earrings and pendants to decorate themselves. These are some of the designs they adopted to differentiate themselves from the Chinese labourers who came in droves at the end of the fifteenth century.

The Nyonya dishes are an amalgamation of Chinese and Malay dishes, giving it a distinct flavor of its own. Nyonya cooking is about the blending of spices, employing pungent roots like galangal, turmeric and ginger; aromatic leaves like pandan leaf, fragrant lime leaf and laksa leaf, together with other ingredients like candlenuts, shallots, shrimp paste and chilies. Sometimes, lemon, tamarind, belimbing (carambola) or green mangoes are used to add a tangy taste to many dishes. Some of the more traditional Peranakan dishes include pongteh (chicken, potato and mushroom cooked in gravy with sugarcane, fermented soya bean and Peranakan spices), ark tim (sour duck soup), bak wan kepiting (crabmeat), otak-otak (barbecued curry fish) and chicken kurmah (chicken cooked with spicy prawn paste).

Although Peranakan food takes a long time to prepare, traditional Nyonyas are fiercely proud of their unique cuisine, spending a better part of their lives in the kitchen to prepare these dishes.

The Peranakan food is one of the most popular contributions of the community to modern day Southeast Asians, as proven by the many Nyonya restaurants that have opened all over Malaysia and Singapore in recent years.

Nyonyas and Babas do not speak Chinese, or any other Chinese dialects. They have a language of their own, which is a form of patois Malay. Some inherit a type of sing-song Hokkien that is unique to the Peranakans.

When the British colonized the country, the Peranakans were among the first group of locals to adopt the English language. They began to view themselves as superior to the other Chinese, who couldn't speak English. During the colonial era, many Straits Born Chinese regarded themselves are the "Queen's subjects", a fact that did not endear them to either the Malays or other Chinese, who were against British rule.

Yet, despite of the adoption of various cultures in their daily life, they have clung to their Chinese identity in some aspects. They celebrate festivals like the Chinese New Year and Mooncake Festival on a large scale. The older generation continued to observe Chinese religious beliefs and rituals, though many younger Straits Chinese eventually converted to Christianity.

The architectural style of Peranakan homes is very characteristic - being a fusion Eastern and Western designs. The "straits eclectic" styled Peranakan homes and buildings are easily identified even til today.

The most distinct differences are the full-length French windows and colorful ceramic tiles on the floor and wall. These expensive tiles are believed to have been introduced by Dutch traders.

Elaborate and striking Chinese carvings adorn the pillars. Being an affluent community, the Babas and Nyonyas spared no expense in acquiring Chinese blackwood furniture, Dutch tiles and porcelain vases to decorate their homes.

A typical Peranakan house has a main hall, second hall (tiah gelap), one or two courtyards, bedrooms, bridal chamber and kitchen. In those days, visitors to the house were normally allowed to the first hall. The second hall or tiah gelap was usually used by unmarried Nyonyas (who cannot be seen by members of the opposite sex) to peep through small openings dividing the first and second halls. Now, as the social life changes, the younger generation of Nyonyas no longer hides in the tiah gelap.

In Malaysia today, there are still some "straits eclectic" styled buildings in Penang and Malacca, where most of the Peranakans lived during their heyday. The buildings are situated along a number of major roads in Penang including Magazine Road, Sultan Ahmad Shah Road (formerly known as Northam Road), Burmah Road, Prangin Creek and Muntri Street. In Malacca, the buildings can be seen along Tun Tan Cheng Lock (Heeren Street) and Hang Jebat Road (Jonkers Street).

Although the intermarriage between Peranakans and other Malaysians and social developments have somewhat resulted in a more dilute Nyonya culture in day-to-day living, Straits Born Chinese still observe their traditional heritage on special occasions such as Chinese New Year, weddings and birthdays. "Old soldiers", the maxim goes, "never die, they only fade away" and this sentiment would appear applicable to the Baba and Nyonya heritage culture in Malaysia.