Of Strings and Things Burmese: An Interview with Musicologist Rick Heizman 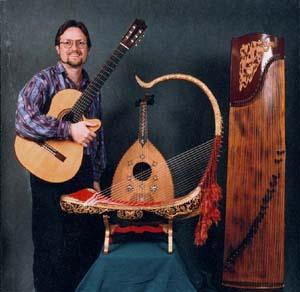 Musicologist Rick Heizman with some of his favorite musical instruments: In the center is a Burmese saung gauk, behind it is a Middle Eastern oud from Syria, on the right is a Chinese zheng. 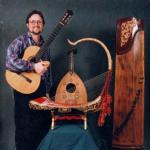 If it has strings and makes music, it's an irresistible magnet for world instrumentalist and ethnomusicologist Rick Heizman. And if it comes from Burma, then doubly so.

For Rick Heizman, involvement with international music has been a lifelong passion, but his love affair with Burma began quite serendipitously at age 24, while passing through on his way to a hiking trek in Nepal.

"Seven days, that's all that was possible in the '80's," says Rick. "But I went to Burma six times like that in the early and mid-80's. On my first trip, I visited Rangoon, Mandalay and Pagan. It was quite a time warp, very traditional, very Buddhist, deep culture, wild music, fascinating and friendly people."

Rick did eventually make it to Nepal on that same trip, and when asked how his adventure compared with what he experienced in Burma, he replied, "Also fantastic...I went back to Nepal many times as well... I am a travel nut. I've been to Burma 14 times since 1981. Also, Vietnam, Cambodia, China, Bhutan, India, Thailand Malaysia, Indonesia, Japan, Turkey, Egypt, Yemen, Albania, Macadonia, Slovenia, Croatia...." Yet in his 14 trips to Burma, Rick feels that there are still plenty of odd corners to explore.

According to his understanding of the historical timeline of modern Burma, and how it came to be the troubled independent Asian nation that it is today, Rick says, "Burma gained its independence from Britain in 1947. Aung San, father of Aung San Suu Kyi, was the first democratic leader. He was assassinated two years later, and strongman Ne Win took over, established a military dictatorship and xenophobic policy and it's been bad since. Nevertheless, the Burmese are a great people, stoically dealing with a terrible government."

Rick feels that Burma is a great country, people and culture to be concerned about, and the government there needs to be disposed of. On his yearly visits there, he maintains ties with cherished friends and is discreetly involved with the political opposition.

Rick is a native of the Bronx in New York City, but migrated to Los Altos and Palo Alto in California at age 10, where he has been more or less Bay Area Californian ever since. He attended Foothill College, UC Santa Cruz, and San Jose State, where he graduated with a BA in Music Composition and Guitar.

In his early adulthood, Rick's parents lived and worked in Hong Kong, China, and India, where his father served as regional head of a high tech company. Rick describes their simultaneous adventures as a "separate but parallel interest in Asia," and recalls that he and his father often met up in exotic places such as New Delhi and Katmandu. For all his trips to Burma, Rick describes the Burmese language as extremely difficult, however, his many travels in Asia have rendered him fluent in Japanese, functionally fluent in Chinese, and able to get by (albeit rusty) in Indonesian.

When he isn't traveling in Asia, Rick Heizman lives in a spacious flat in San Francisco's Inner Sunset district. In his curriculum vitae, Rick is a self-described guitarist, composer, teacher, performer, ethnomusicologist, world-instrumentalist, musicologist, recording artist, and producer. A professional, multifaceted musician, much-in-demand and highly regarded guitarist equally proficient in jazz, classical, Brazilian, and 'new original' styles. He is a composer who has written for guitar, other Western instruments, and many world instruments, and produced, performed, and recorded his works. Rick is also a very busy and popular freelance teacher of jazz, classical, improvisation, and music theory.

Rick has had a long fascination with other musics of the world. He has traveled many times to far corners of the world - absorbing music and culture, doing projects, and collecting and studying many instruments. As an ethnomusicologist he is always studying some form of world music, and has contributed his skills and knowledge to many projects and recordings. He is a world-instrumentalist who has studied and plays other instruments such as, dan tranh (Vietnam), saung gauk (Burma), ud (Middle East), tar (Persia), kora (West Africa), and mbira (Zimbabwe).

As a musicologist, Rick studies and performs such particular styles as Baroque Trio Sonatas, or German Baroque lute music. A recording artist, he has recorded numerous CD's of his own works - both as a 'Western' musician, and as a world musician - and has contributed to various other projects. As a producer, Rick has done some very interesting recordings, particularly in the country of Burma. He has produced, recorded, and documented the bulk of Burmese traditional music available in the world for a number of record companies, including Smithsonian.

In 1996, after visiting Burma again, Rick, as an ethnomusicologist, recognized that the vast musical world of Burma had barely been recorded by the outside world. So Rick felt compelled to record and document the music world of Burma. He sought out Burmese musical virtuosos, well known in their musical circles, one of whom is a virtual national treasure, a harpist named U Myint Maung.

And while Burma does have its own brand of pop music, Rick focuses mainly on traditional and "evolving traditional" genres. For those unfamiliar with traditional Burmese music, Rick describes it as, "Quirky, energetic, and virtuosic, with a complicated technique. And while having no Western influences, it can sometimes seem like modern, quirky jazz. It is not necessarily soothing, and definitely not for the timid."

Rick Heizman finds his bliss in figuring out a new odd instrument, and feels that the worst waste of time is catching up with mundane "office/computer" type work and not getting to one of the many great instruments laying just near by. His motto: Do something interesting, artistic, beneficial, unusual...do it well...and do something with it."