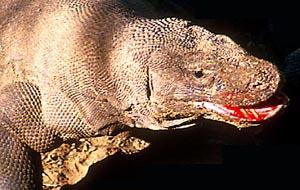 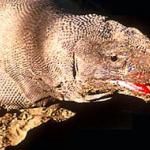 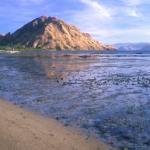 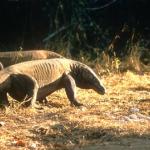 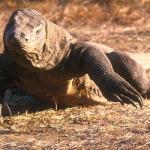 The ruler of the island, patrolling the shore as we attempted to land our dugout, was not a pretty sight. We'd obviously interrupted his meal - a culinary altercation with a large turtle - and he wasn't pleased. His callused feet splayed in the sand, and his territorial stance left no question as to who was boss of this place.

Then he swaggered closer to the edge of the water, rather like a muscle-bound weight lifter moving from the hips, and before anyone could say "Welcome to Komodo Island" he roared - a sound somewhere between an extremely loud hiss, an oxy-acetelene torch and a jet plane taking off.

After twenty-four hours in a rotting schooner, riding the vicious currents of Indonesia's "ring of fire" we would have liked a friendlier reception. Some feather-decorated dancing villagers perhaps, a flotilla of eager natives selling tropical fruits, or at least a couple of screaming children brandishing carvings.

But what we saw shocked us - even at this distance his mean features were formidable. We'd heard about his astonishing strength, his sheer bulk, his peculiar sleeping habits, his superior intelligence and his cunning. Yet his dress sense and manners were appalling. He was wearing a suit of armour, studded with iron knobs, so heavy it hung in rumpled folds and appeared to weigh him down. Sunlight glinted off bloodstained saliva that drooled from his gummy lips, and a piece of the unfortunate turtle hung, like a tired cigar, out of the corner of his ugly mouth. His reputation had done him justice.

Tyrannosaurus Rex was alive and well, and probably living on steroids, on a remote island in Indonesia. For a wild moment I believed I was on the set of Jurassic Park with Godzilla playing the lead. And it had all begun as a chance remark at a dinner party.

I'm a photographer with a penchant for unusual places, and the dares of my friends at dinner parties had sent me from Patagonia to Potchefstroom. "Heard about the dragons that live on Komodo island?" they taunted. "Those giant lizards that drool blood and eat humans for fun?" My souffle stopped halfway to my mouth and I was out the door before they could shout "Send us a postcard!"

I arranged to sail to Komodo island with three television cameramen who happened along at the right time.

Now, just 480km from the tourist mecca of Bali, and two days by boat, we had entered the domain of these dragons, where myth, fantasy and a dangerous reality live in an uneasy alliance. Komodo island, part of a small archipelago nestled between Sumbawa and Flores in the Lesser Sundas, shelters most of the 3000 living relatives of the carnivorous dinosaurs that thrived in tropical Asia 150 million years ago.

The Komodo Dragon. The largest lizard on earth - four metres from head to tail and weighing in at 150kg. Extinct everywhere except Komodo Island and Rinca and Padar, its two neighbours, since the Jurassic age. Predatorial, virulent, unpredictable, fast moving, riddled with bacteria and carnivorous. Able to devour three times its weight in one meal. Rancid breath that would make an Apache's hair stand up. And I, terrified even of spiders, about to enter their domain.

I sat on the prow on a plastic chair roped to the rails, while the schooner bobbed and tossed in furious waters; sailing precariously close to numerous coves and bays it seemed sometimes we could reach out and touch the craggy perforated rocks. Occasionally we'd pass ancient dragonfly craft battling the furious elements, sometimes we'd catch a squinting glimpse of fishermen whipped by the waves.

I struggled with the reality of being rescued from the primeval rolling hills and uninhabited shelves of rock, where the legendary dragons and flying foxes had roamed even when the surrounding volcanoes were still bubbles on the ocean floor.

A huge blob of molten sun slid behind Gunung Tambora, the volcano in whose shadow we'd been sailing all day. The ocean calmed. We climbed to the top deck, opened a precious bottle of rum, and, sitting among five tethered chickens, slugged from the bottle. Life wasn't so bad, after all.

Komodo Island has been described as the "jagged concealed heart of a sleeping volcano protected by a raging moat". Forbidding crags and primordial glens pock the sheer limestone cliffs like a diorama around the boiling crystal waters. We stood on the kerosene-soaked deck and stared, like the Ancient Mariner, at a land before time. And then we drifted into Komodo's Loh Liang Bay in a purple, prehistoric dawn, across a mirror still sea, accompanied by a lazily flopping turtle and some jumping fish. Perfect dragon country.

And now, just ten metres from our host's dripping jaws, I was sorry I wasn't a housewife.

Varanus Komodoensis (ora to the locals) also known as monitor lizards because of their apparent ability to warn of the presence of crocodiles, have been the subject of myth and speculation for centuries. Early Chinese traders used dragon skins for drums; they are phenomenal swimmers, easily able to cover four kilometres at a depth of a metre, so their body fluids were extracted to make "swimming medicine.

And how I wished I had some of that "swimming medicine" now. The dragon had resumed his feast, tearing the brown speckled shell with rows of shark-like backward-slanting serrated teeth. Then he looked towards us expectantly, as if waiting for applause, and with an expression of bemused ennui, turned tail and swaggered off into the bush.

Apart from our reluctant host, and the whale that had followed us for hours, occasionally tossing it's barnacle-encrusted tail out the water, the bay into which we had sailed was deserted. Just us and the spoor of a dragon on a coral encrusted beach bordered by 600m savanna covered cliffs - a pale, arid backdrop to the tall green Lontar palms growing like giant fly whisks in the occasional ravines.

The dragons rule Komodo Island, outnumbering humans eight to one. Although I wanted to photograph them at close range, I didn't want to reduce the odds. So long before the first call of the muezzin, when the cold-blooded dragons were still drowsy, we rowed like smugglers to the softly lapping shore. The rangers were waiting, forked sticks in hand, and skittish.

"Quiet! Dragons crossing!" implored a sign but a prehistoric orchestra took no notice. Megapode birds strutted around doing a dusty ballet near their mounds, cicadas sang, cockatoos cackled in the tamarinds, hand size spiders swung in sticky hammocks; wild dogs tore off into the undergrowth and jungle fowl called their mates.

We heard them breathing before we saw them. Long rasping sighs, as if the very thought of being around for another hundred and fifty million years was too much to contemplate. When the first shafts of warm sun streaked over the hills, the dragons began to stir from the burrows in which they'd crawled to keep warm during the night. They yawned, their jaws gummy, pink and wide as a shark's.

Then in a slow-motion, arthritic danse macabre, they edged out and surveyed their terrain, flicking their tongues along the ground like minesweepers. Every few steps they'd rest, collapsing on their powerful forelegs.

Dragging each cumbersome foot with enormous effort, they lumbered into the dusty shafts of thawing sunlight, scratching and clawing at the dry ground, trying to warm up. The air temperature climbed rapidly - orange and white butterflies began to swoon in the heat

At this time of the morning they appeared to be slightly confused, gentle creatures that would rather slouch off away from an altercation than enter into the bloody duels their reputation demanded.

Komodo Dragons have a formidable reputation when it comes to table manners. They kill deftly and quickly: often relying on a quick swipe of their powerful tail to knock a victim off its feet, disembowel it with one bite of their razor sharp teeth, and shake the intestines out. Bone, fur, hoofs and antlers are swallowed whole - the dragons' articulated jaws enable them to manoeuvre large pieces.

But that's not the worst of it. Dragons chew their gums to make them bleed, producing a virulent bacteria that causes a slow and painful death. If a victim is lucky enough to escape with just a bite, it won't be long before septicaemia sets in. Then the dragons use their long, yellow, forked tongues - supersensory smell organs - to sniff out victims up to 11 km away.

I decided to go down into the pit, with a ranger at my heels. The stench from dragon breath was so strong I reasoned they wouldn't smell my fear. I stalked up to the fifteen sighing and hissing dusty dragons. In slow-motion they clawed and scratched each other, drooled blood and spurted copious amounts of steaming urine. I was so scared my tongue stuck to the roof of my mouth and my damp hair clung to my scalp. I clutched the ranger's hand so that if he ran he'd take me with him.

A huge beast lumbered from behind me at the speed of a lawnmower, mounted another that was using its shade, and clawed its back like a lawnmower attacking a patch of weeds. The two reared up, spitting distance from where I was cowering, and wrestled for a few long seconds like two punch drunk sumo wrestlers.

Dust and stones were kicked into my face. "Still. Still!" commanded the ranger, placing his hand firmly on my shoulder so that I couldn't flee. With a rasp of fiery breath, the victor toppled the bleeding vanquished, who skulked off into a patch of sun, and I scrambled up the banks as fast as I could, determined that if I ever returned to civilization I'd stay home and make jam.

On the boat each night, dreaming of civilization and soft beds, I gave thanks that I hadn't yet become dragon fodder. Meanwhile, back up the hill, the dragons who'd roamed their island for 150 million years were burrowing into their holes, dreaming of a time when the tourists would just leave them be.