The Valley of Kathmandu - 1 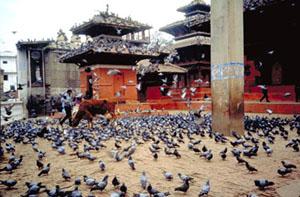 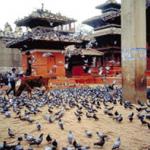 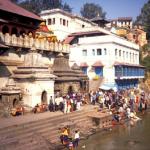 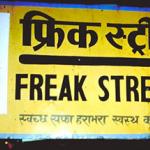 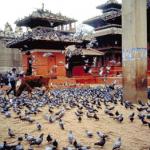 Diwakar, our guide from Yeti Travels, beamed at our good fortune. We were at Pashupatinath, one of the holiest Hindu shrines in Nepal, less than two miles outside of Kathmandu. Having climbed the terraced hill on the opposite side of the river, we were looking down at the temple complex.

There was indeed a body.

Long isolated by geography and political policy, Nepal is expected to be a remote and fabled kingdom. Located at the crossroads of ancient trading and pilgrimage routes in the fertile Kathmandu Valley, more than twenty thousand feet below the fierce poetry of snow sculpted Himalayan crags, Kathmandu streams a trail of exotic connotations. We anticipated mystery, enchantment and mysticism from this city founded in 723 A.D. and were not disappointed; we did not, however, expect pollution and traffic jams.

And we certainly were not expecting a corpse.

"The feet of the body are in the water so that the soul can be released into the Bagmati River, a tributary of the sacred Ganges; after the cremation, the ashes will also be swept into the river," Diwakar explained, unaware of our uneasiness.

The scene before us was surreal. The body was being attended to by three people who were washing the corpse, with difficulty, since it was wrapped in a sarong and outer sheath of pink plastic. "One must be cleansed before entering a different plane," Diwakar commented. Nearby, milk from cows kept in the temple flowed down the embankment, a white river of excess. Tourists, cameras on tripods, the stack of wood on the ghat in focus, awaited the flames. Monkeys jumped from rock to rock panhandling food. Dogs, scores of them, slept in the sun or tore at garbage. A girl of about twelve selling a necklace with a mandala charm harangued relentlessly.

"It's a matter of conditioning," philosophized Diwakar, realizing our discomfort and leading us away. "Watch where you walk," he cautioned, stepping around dog excrement.

When Nepal's King Yaksha Malla died in 1482, a rivalry developed among his three sons; each took a portion of the Valley, creating three kingdoms and the city-states now known as Kathmandu, Patan, and Bhaktapur. The competition among the subsequent monarchs of the three cities continued until the Mallas were defeated and the country reunified in 1763. The kings of each city created a Durbar (palace) Square and each attempted to outdo the other in the building of temples, shrines and palaces. Today the three Durbar Squares, all within a few miles of each other, have been designated as world heritage sites.

In the sixties and early seventies, most visitors to Kathmandu congregated in Durbar Square, the city center. The majority of these travelers had trekked the hippie trail, enticed by the then legal marijuana and hashish. So popular was this area that a nearby road is still called "Freak Street" and a temple to Shiva where the turned on and tuned in grooved and rapped and preached peace, love, and flower power is popularly known as the Hippie Temple.

Basantapur, at the southern limit of Durbar, is a bustling flea market during the day. Every morning, a hundred or so vendors unload their wares from crates and arrange them just so on mats or makeshift tables. Among the many items displayed are elaborate antique locks that the vendor swore were from "a very old temple" and singing bowls, metal bowls which produce a vibrating hum when the rim is rubbed with a wooden wand, used by Buddhist monks during meditation.

It is easy to be overwhelmed by the variety and number of temples and shrines in the interconnected courtyards of the ancient royal complex. Perhaps noticing our bewilderment, Khagendra, a fifteen-year-old student volunteered to be our guide, explaining he needed money for a private school. When asked about public schools, he shook his head sadly, "Not very good."

Khagendra related an anecdote about every statue, shrine, pavilion and palace. Every building was ornately and intricately carved with deities and symbols; lintels, friezes, roof struts -- the woodcarvers left nothing undecorated. Elaborate latticed windows with interconnecting complex patterns have been painstakingly restored; these were the famous one way windows, allowing royalty to peer out without being seen.

The oldest and largest building in the complex is Kasthamandap, dating from the fourteenth century. According to legend, wood from a single tree was used in its construction. One pillar worn smooth near its base is reputed to cure back problems if the back is rubbed against it while circling in a clockwise direction.

We stood before a huge mask of the god Bharib which was covered by a screen. Khagendra explained that the screen was removed during the Indrajatra festival and that beer flowed through the mouth to refresh the revelers; each day a small dried fish is included in the stream of beer, bringing good fortune to the one who receives it.

On the western side of Basantapur Square is the Kumari Bahal, the monastery of the Kumari, the Living Goddess. As we stood in the courtyard, Khagendra related the curious details of the life of the goddess.

The Kumari is considered an incarnation of the Hindu goddess Taleju; the young girls of age three or four must come from the family of a Buddhist goldsmith, and to be selected, must meet a number of criteria that range from the poetic to the gruesome. According to tradition, the child must have the body of a banyan tree and the cheeks of a lion, among thirty additional physical attributes. To prove that she is indeed an incarnation of Taleju, however, she must also witness the sacrificing of one hundred and eight water buffalo without flinching.

The Kumari lives in virtual isolation, leaving the dwelling only during the Indrajatra festival, when she is paraded through the city in a chariot. Great care is taken to protect the Kumari from cuts, for if she bleeds, she is replaced. At puberty, a new Kumari is found and she spends the rest of her life a virgin.

For a donation, a visitor is blessed with a view of the Living Goddess; she will appear ever so briefly on the balcony, a little girl dressed in bright red, eyes heavy with mascara, looking down superciliously, granting a glimpse, an ephemeral flash of indifference from a child who has seen so much death, so much blood.

Rivets and Silk, Tin and Teak