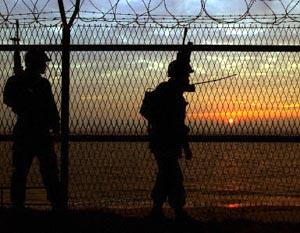 South Korean Marines patrol along the seashore in Baekryong island, about 220 km west and north of mainland South Korea and 12 km southwest of North Korean territory. 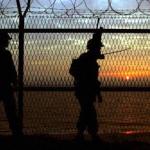 It takes five hours steaming on a down-at-heel passenger ferry from the port city of Inchon to reach Baekryong island, a frontline outpost manned by South Korea's crack "Black Dragon" marine brigade. To the north and east of the island North Korean fishing boats often bob innocently on the Yellow Sea swell. Occasionally they steal across the disputed maritime border known as the Northern Limit Line to poach crab and anchovy.

By an accident of history, geopolitics and the fortunes of war, Baekryong is caught in the middle of the Cold-War stand-off that still divides the Korean peninsula. As tension mounts over the North Korean nuclear crisis, thousands of marines guard the island that nudges the 38th parallel to the north, the dividing line between communist North and capitalist South from the end of World War II.

North Korea seized the island in June 1950, imposed communist rule for a few months before troops scattered as the course of the 1950-53 Korean War turned against them.

A well-tended monument stands to Baekryong's guerrillas who fought the invaders in wooded hills and rice paddies.

On the mainland to the southwest, the North Korean border now comes well below the 38th parallel, but the disputed sea border goes further north in a line that encompasses Baekryong and other islands held by South Korean forces at the end of the war.

Since then Baekryong, settled since pre-historic times, has been transformed into an island fortress where even the housewives learn to shoot straight and serve in the military reserves. The 46-square-kilometre (18.4 mile) island, one of the 10 biggest in Korean peninsula waters, tempts only the few hardy tourists willing to rough it in no-frills hotels and eateries serving fresh-caught seafood. Steel fences topped by razor-wire keep many beaches off-limits to would-be sunbathers and swimmers. Birdwatchers and hill walkers avoid restricted areas occupied by gun emplacements and military observation posts. Just across the water, about 12 kilometers (seven miles) away and easily visible on a clear day, lies North Korea, where artillery batteries are dug in along the coastline.

"What worries us are those guns," said Lieutenenat Choi Jae-Lim of the 6th "Black Dragon" marine brigade, in charge of Observation Post 807, the highest point on the island. Locals shrug off North Korea, but the earth beneath villages and schools across the island is honeycombed with bunkers to shelter the population of around 8,000, half of them military.

"North Korean artillery is what we focus on most," said Choi, briefing Seoul-based foreign journalists invited to the island for the first time in five years.

The farmers and fishermen of Baekryong island paid little heed to the costly and massive security operation conducted around them. "It's been like this for 50 years," said Lee Won-Bae. "We just don't bother about it any more." Lee was born in the North and says he defected to the South as a 14-year-old to ecape communism and start a new life in Doo Moo-Jin fishing village, a settlement at the head of a small inlet between verticle cliffs.

Kim Kyung-Soh moved to the village several years ago from congested Inchon with her husband, the local pastor, and her nine-year-old son. She sleeps better at night. "If North Korea is going to fire the guns they will target Seoul, not us," she said.

Villagers erected a monument to five Doo Moo-Jin fishermen who never came back from the sea in July 1970 after running into a North Korea patrol boat bent on kidnapping them. One was shot dead and four others presumed drowned trying to swim to safety, the monument says.

That was a long time ago, said Song Chul-Ho, 65, gutting fish and sorting the day's catch on the landing stage. "We have other problems now," said Song. Locals are more concerned about Chinese fishing boats they say are plundering their waters, accusing them of cutting South Korean fishing nets and depleting the rich fishing grounds.