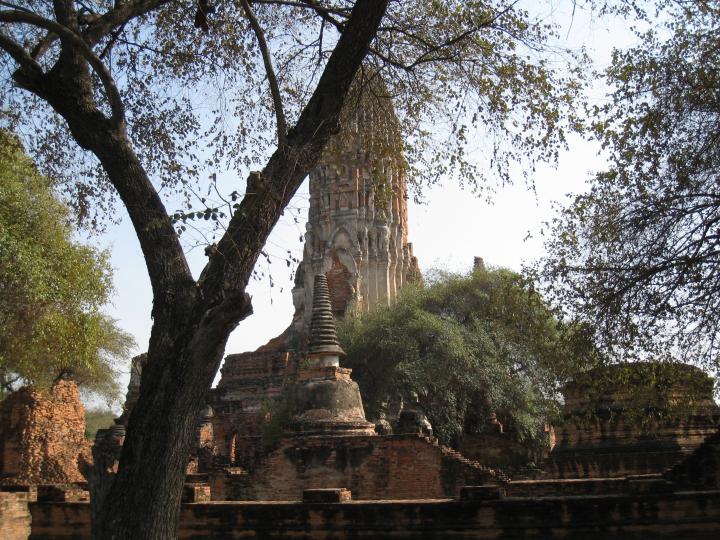 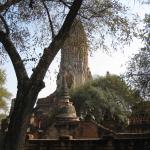 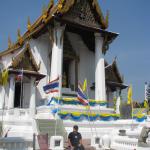 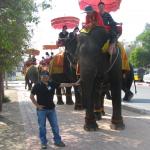 Ayutthaya, whose name means “undefeatable” in Sanskrit, may not be as popular as Bangkok, Chiang Mai or Phuket but it’s one of the many places in Thailand that’s frequented by tourists who want to see its world-renowned ruins. More than 200 years ago, these ruins used to be the landmarks of the powerful Southeast Asian kingdom that came under the rule of 33 kings of five different dynasties.

In its heyday, Ayutthaya was a bustling metropolis of international repute, whose progress, according to historians, rivaled even Europe’s capitals at the time. After the Europeans started circumnavigating the world in the 16th century, they established economic relations with the Ayutthayan empire. So prosperous was the kingdom that her neighbor Burma (now Myanmar) coveted her. After many failed attempts, the Burmese army succeeded in burning and sacking the city. Today, only the debris of the empire’s glory remains, forming part of what is now known as the Ayutthaya Historical Park, which is listed as a UNESCO World Heritage site.

For the past few years, I had been planning to visit the city and be among the thousands who’ve been amazed by the site of one of the finest remnants of ancient Asian grandeur. But those best-laid plans had to be shelved considering the grim scenario of sharp global price increases, which has made a holiday abroad a luxury beyond my means. A trip to Thailand would surely burn a big hole in my pockets. But life is so full of pleasant surprises. A chance to visit the Land of the Free – free of charge – came my way quite unexpectedly this year. And before I could even learn to speak Thai, there I was, on a humid Wednesday afternoon, staring in awe at the ruins of Ayutthaya.

It was a workshop sponsored by an international organization that served as my passport to Thailand and eventually to the historic city. After concluding our official business, the facilitators decided to take the 44 delegates to the historical park. And so began my eventful, hour-long exploration of one of the world’s most enchanting sites. The brief tour roused my curiosity about the former capital of the Thai kingdom and its turbulent history.

As the bus neared our destination, I remembered reading that paying homage to Gautama Buddha in nine temples within a day will bring about prosperity. What’s so special about the numeral nine? Buddhists consider it a lucky number because its Thai homophone, kao, literally means “to step and to progress.” The wishful thinker in me kept on insisting that somehow good luck would rub off on all temple visitors, Buddhist or not.

It was with great excitement therefore that I relished my being an accidental tourist in Ayutthaya. Our group’s first stop was Wat Na Phra Meru Rachikaram, which means “the temple in front of the royal pyre.” Buddhists believe that those who visit this wat will be blessed with prosperity and love. Now known as Wat Na Phra Men, it is perhaps the only monastery that survived the Burmese invasion mainly because they used it as a base to launch their attacks. Built in 1503, it underwent numerous restorations centuries later. The wat houses two images of Buddha: one is a large bronze statue dressed in regal attire; another is a stucco image sitting in a European way. Entrance fee is only 20 baht but the frugal in me prevailed so I passed up the chance to see both images and be blessed for paying homage to them. Instead, I chose to take pictures of the temple’s façade and grounds, including the statues and artifacts in a nearby shrine and mini-museum.

From Wat Na Phra Men, we went farther into the old city, passing by Chedi Phra Si Suriyothai, a memorial dedicated to the first heroine in Thai history, Queen Suriyothai, consort of King Mahachakkraphat who fought the Burmese. During the violent clash, the queen came to her king’s rescue but she was killed by a Burmese commander. After the war, her husband ordered that her remains be cremated and that a wat be built on the cremation site. Today, the reconstructed temple stands as a monument honoring her valor.

Upon reaching a sprawling field, all of us wandered our separate ways into the historical park. It was there where I saw a herd of elephants plodding the road, tourists perched on their backs. One of the beasts walked towards me – the first real one I ever saw, up close and personal at that. As he passed by, I gently touched the elephant’s snout. For a moment, he didn’t budge, allowing himself to be petted. Then, he moved forward. For a fee, tourists can take a brief tour of the ruins on the back of the mammoths.

As the beasts went away, I resumed hiking until I reached the ruins of a lofty structure that even in its blighted state evoked reverence. The stones were crumbling on its bordering walls, but its stupa seemed to rise like a gigantic corn cob in the middle of the remnants. I gasped as I found its name in the brochure that I brought. Whew! I was amidst the ruins of Wat Phra Ram (the temple of Rama), Ayutthaya’s oldest temple. Built in the 1300s, the wat was done in Khmer style with a prang mounting the main structure. Unlike the others, this wat seemed to have been abandoned. Alone in the ruins, I felt like some 20th century archaeologist who stumbled upon an important historical find.

I continued to roam around the park, heading towards a massive Buddhist monastery known as Wihan Phra Mongkhon Bophit, which houses a gold-covered image of a sitting Buddha, said to be one of the largest in Thailand. When Ayutthaya fell, the Burmese burned the wihan (monastery), as well as the image, to remove the gold that gilded its stupas. What stands now is actually a reconstruction of the original.

Word has it that those who drop by the wihan will be blessed with prosperity in trade and success in their jobs. No wonder there was a huge crowd making its way into the monastery, seemingly unmindful of the mid-afternoon sun’s scorching rays. I simply turned around and walked away, forfeiting another chance to get lucky. At that moment, I wasn't really in the mood to rub shoulders with the throngs of devotees and tourists. Instead, I wandered around the wihan’s vicinity until I found a row of stalls selling a wide variety of goods: t-shirts, hats, bracelets, necklaces, key chains, toys, and all sorts of raw and cooked Thai delicacies. After buying a few souvenirs, I headed back to the monastery.

The wihan was still teeming with people. Later, I saw a band of bhikkhus (ordained Buddhist monks) coming out of the temple. Clad in orange robes, their austere faces radiated inner peace that must be coming from having attained nibbana (nirvana), an ideal state where Buddhists find rest, harmony, stability, and joy. For a while, I was fascinated by the idea of shaving my head and wearing those robes if only to experience such bliss. Then I laughed at myself for letting Ayutthaya’s mystique trick me into considering such thought.

I looked at my watch and sighed with disappointment. It was 3:15 p.m., time for us to return to Bangkok. An hour of exploring the remnants had only left me hungry for more. As I boarded the bus, I threw a glance at the ruins, silently wishing I’ll have another intimate encounter with them in the near future. If only I owned time and had wads of baht in my pocket, I‘d stay there for a while and tour all the wats inside the park. Geez, so many temples to see, so little time.

Before Ayutthaya, I had a shallow grasp of Thailand. After seeing those ruins, I felt an unusual interest in everything Thai. My creative juices were overflowing; there was a strong urge to probe and write something about Thailand, its history, its people, its culture. It has been months since that trip but I’d still be soaked with amazement each time I'd recall that visit to the ruins.

While writing this, it occurred to me that the Burmese victory in Ayutthaya may have been hollow in another sense. Yeah, they succeeded in crushing an empire but they failed in breaking the spirit that has galvanized the Ayutthayans to rise from the ravages of war and carry on.

In that sense, Ayutthaya has truly lived up to its name – an undefeatable city.