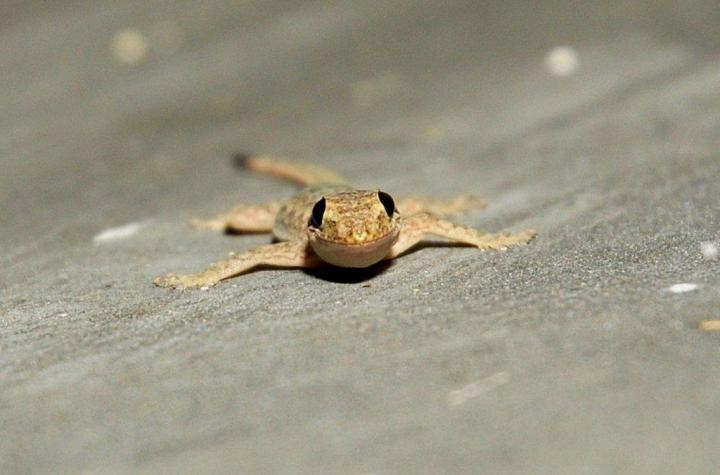 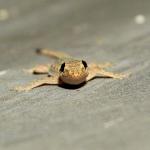 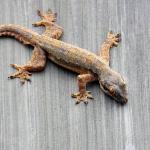 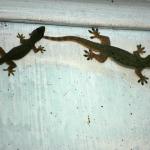 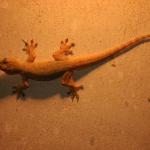 Each territory has its own unique variety of native animals, bugs and creatures; the island of Mindanao is no exception and has some interesting species as well. Allow me to introduce you to the most famous and notorious of them all; the Butiki, alias the Philippine Gecko, also known as our house lizards.

Butiki means lizard in Pilipino. Every single Philippine home, big or small, rich or poor, has at least a few of them, you may find big and little lizards scurrying around on ceilings and crawling on walls, they are really everywhere, behind the closets and curtains, on the back and in front of our television, under the bed and next to the refrigerator. These impressive critters unexpectedly jump out of drawers and cupboards, scaring the jeepers out of me. Waking up in the morning and staring directly at this big-eyed lizard's head, that is sticking its slippery tongue out at me, is not a very pleasant experience. When pairing, they have a tendency to sometimes drop off the ceiling they're stuck on, losing their balance and fall on our bed or floor, giving me the shivers all over my spine. I am not really afraid of lizards and I don't have any resentment against this indigenous vagabond, in any form or variety. I just don't like the idea of one creeping up on me and will limp along all over various parts of my body.

The Koronadal City neighbourhood, we live in is not highly populated, there are only a few houses scattered around the mainly agricultural area and I asked myself why these undersized dragons have chosen our humble house as their most favourite human dwelling. Although there are large areas to bum around and hunt, plenty of safe places to lay their eggs, the surrounding wide open fields and lush forests are harbouring more than enough tasty prey to feed themselves and nourish any off spring they may produce, our long-tailed rascals really make themselves at home in the house. They don't seem to care that we live beside them under one roof, most members of my family don't mind them either; they consider these insect-eating ruffians as kith and kin. Because they helpfully prey on everyday bugs, that we don't feel we need around the place, I've been told to ignore them and should not be bothered by their ongoing presence. But for me it is difficult to take these pocket-sized leguanas for granted, I do not like to come across their crummy droppings all over the place. This crap has to be removed on a daily basis and the spot where this substance was left behind thoroughly cleaned. I understand that I cannot expect a lizard to be housebroken but it is clear to me that these four legged scoundrels do not share my particular views on domestic hygiene. Naturally, these animals must reproduce and I know that most lizards lay eggs in simple nests, so why not doing the same thing on this island?  Many hard crusted embryos have been found in cabinets, on window frames and shelves in and around electrical boxes and sockets. Most of the times I try to collect these cackle berries and put them outside, at least these fragile eggs do not run away. Unfortunally, some days later I can only find the cracked, empty shells and can look ahead to run-in to a few green colored, lingering juveniles in our living quarters once more.

A Butiki spends much of its time high up on ceilings and walls, but a legend goes that every afternoon all Butikis in the country descend to kiss the ground. At exactly six o'clock every night, the Butikis are supposed to come down and make slight ticking sounds like quick kisses. It is believed that the Butikis with its tiny ears could hear an ancient heartbeat and a never-ending lullaby coming from cracks in the soil. A night-time song, sung by a mother's heart that was ripped out by her own son who was tested by God, deceived, by a beautiful woman and later changed into a lizard, kissing the ground and begging for forgiveness.

It is not known if there is any truth in this intriguing anecdote, in my straightforward opinion and with all due respect I do have my doubts. I have been watching these stray ramblers very closely at that specific time and nothing happened at all, in fact I can tell you that they stayed where they were, on the ceiling or the wall, only moving to catch an insect or small spider.

Trying to photograph a Butiki is great fun and fascinating, because they are shy and very hard to snap it is a challenging and intensive activity. It felt like an eternity when trying to get a good shot, every time I had the miniature mugger in focus, thinking I had a perfect picture, it turned its back on me and wiggled away, waiving its tail at me. Just like it wanted to say: "sorry mate, not now, better luck next time". It took some time to get the images I wanted, however, I have learned that simply observing these short legged carnivores helped me to understand, respect and appreciate them. By getting closer I realized these critters are more afraid of me than I am for them, so keeping more distance and using another lens on my camera did solve this problem. I discovered the beauty of our small housemates and became interested in their, sometimes funny, behaviour. While in the process of waiting for the ideal image, pushing myself to the limits of my patience, I saw bustling, harmless individuals crawling in their own wayward manner to and from each other, sneaking on their potential prey, many times a careless mosquito, and eating its victim alive after a rapid surprise attack. They truly are amazing busy stalkers, always on the move to get their daily food supply.

I was astounded to see these creeping drifters remarkable ability to defy gravity and attach themselves to smooth surfaces and fascinated by their capacity to walk on walls and upside down on the ceilings. I could not help wondering how the world would look from a lizard's perspective, most of the time seeing the earth upside down. If one of these die-hards was a little bit too enthousiastic when fooling around with the opposite sex and fell down on the ground, it nearly always made a four-claw landing.  But once lying on its back it was incredibly helpless, awfully vulnerable and not being able to return on its paws by itself.

It appeared to be in terrible desolation and under excessive pressure, probably speculating when this enormous predator would bite its throat, tear it apart and eat it. As soft-hearted asI am, I do not like to see animals in distress, so scooping the unfortunate scavenger up with a dustpan was the only sensible thing to do. The minuscule Gila monster instinctively sprinted as fast as its legs could carry it, enabling it to get to higher grounds and join its fellow hunters. After several skirmishes, that seemed to be more like a territorial dispute with some cold blooded clubbers of its own kind, the lucky dude regained its place on the plaster once more.

Choosing its personal space close to electric light it made chirping sounds when interacting with other geckos, a kind of noise that is reminiscent of a cricket. I have to be honest and admit that I love to listen to these well-tuned trailblazers, I realize it is a warm and familiar sound that is an inseparable piece of this wonderful place I call home.

Like the iconic Jeepney and the Bahay Kubo, the Butiki is a symbol of the Philippines and an integral part and parcel of every day life. It is a general believe that they bring good fortune to their host family; simply killing them will bring bad luck. The Filipino culture is rich with colourful superstitions about almost everything and anything, passed down through the generations, it is said that if a Butiki falls on your head, it will start raining, when a house lizard makes its sound near a door, it means there will be a visitor very soon, if the sound is coming from a window, you have received mail. If one opens an umbrella inside the house, a lizard will fall from the ceiling and a Butiki indoors will prevent a snake from entering the building. Believe it or not but these ubiquitous nocturnal mosquito killers are, when crispy fried, also considered as medicinal and presumed to be a cure for asthma and cough, some people told me that this unusual and bizarre local delicacy tastes like chicken. I'm not a medical expert or an authority on food, I always like to try any regional home cooking and in fact I have an appetite for the culinary unusual, all the same, I reckon I will definitely pass the opportunity to taste this once-wriggling and tropical treat.

All folkloric believes has grown from something and there is no smoke without a fire, but these elusive invaders predictive talent and healing potential is not going to change my mind about them hanging around in our homestead. I think it will be better to look for a logical explanation and find a creative solution for my personal dilemma. I have tried to figure out many ways to catch these small-scaled wanderers and put them outdoors, I made numerous attempts to remove these tiny visitors from our premises and sadly had to find out I couldn't, because they sure are fast little buggers. These irritating trippers run too quick for me and are able to disappear in almost every crack and hidden hole that they can find. Just putting them outside is impractical and actually not an option, they will be back even before I enter the house again. I think our inevitable lodgers made a long term commitment to stay with us and I have a nasty feeling I may never completely get ridof this unwanted household annoyances. For some people the keeping of reptiles as pets in their house is a challenging hobby, I am not much of a reptile fancier myself, so it would not be a great pass time for me. I really hate harming wildlife and I do not believe animals should be locked up in cages or glass boxes, these living beings are supposed to hang back freely in the countryside.

Even though now I passively accept the existence of the dozen or more of these rural dwellers in and around our residence, I do have mixed feelings about them. I can adapt to changes very well, so it is not that hard to acclimatize to the life in this equatorial climate, but that does not mean I will regard my newly acquired scrubby friends as welcome guests. They are indeed, in every sense of the word, wonderful, versatile and useful creatures of Mother Nature; they help us keep the number of stinging insects and aggravating bugs in our house down. I know they do not bite and are not poisonous, I acknowledge the fact that there is absolutely no need to be afraid of these indoor cliff-hangers but it's best to leave them alone and I understand there are much dirtier and more dangerous squirming, strolling and flying intruders roaming around in Mindanao.

However, despite all the good reasons being told to me, regardless their indisputable advantages, notwithstanding the gecko's significant contribution to the ecological system and nature's diversity on this charming and exotic islet, I just wish, certainly for my own peace of mind, that these uninvited squatters would stay where they belong, in their natural habitat ...outside!