A day in the Suigo Sawara Municipal Aquatic Botanical Garden 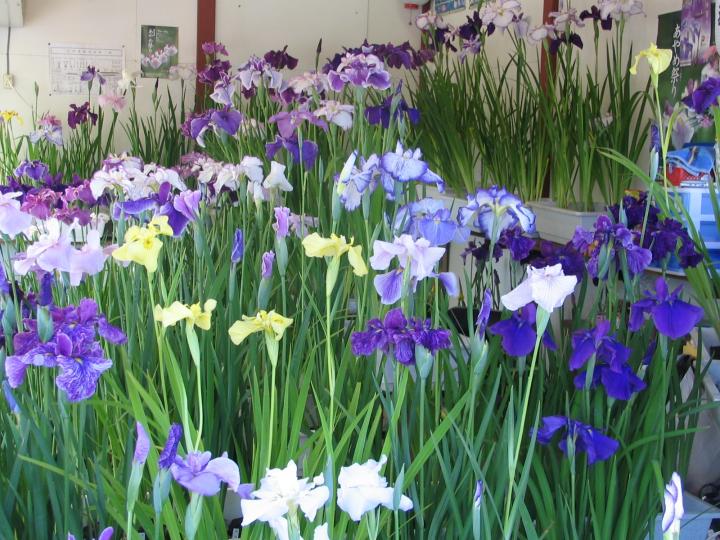 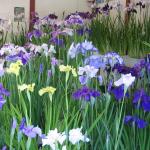 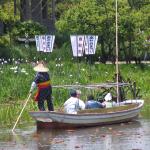 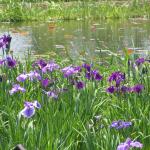 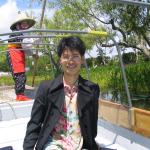 The city of Sawara in Chiba was lovingly called “Little Edo” with its classical architecture, beautiful waterways and festivals in summer and fall.  One of the major attractions is the Sawara Municipal Aquatic Botanical Garden (founded in 1969) with its 1.5 millions (400 kinds) of Japanese irises and 50,000 foreign irises blooming in early June.

To get to the garden, from JR Tokyo Station, there is an expressway bus (102 minutes) that goes directly to the garden.  But more frequent and less expensive will be by a combination of trains and buses.  From JR Tokyo Station, take train to Chiba and change to Narita Line to reach Sawara Station.  From there, take a schedule bus going through the city and then reach the garden after 25 minutes, or alternatively, just take a taxi from the station to reach the garden under 15 minutes.  The garden is opened 7 days (May to August) from 9 AM to 4 PM with hours extended to 7 PM during Iris Festival (June).  From September to April, the garden is closed every Monday.  Admission is only 700 yen during the Iris Festival.

The Sawara Aquatic Botanical Garden is the most exquisite Japanese iris garden in Asia.  100,000 blue flags and 50,000 irises bloom on the 6 hectares of the garden in April and May, followed by the flowering of Japanese Irises.  The collection included 400 kinds of the Edo, Higo and Ise iris groups and visitors are overwhelmed at the vastness of 1.5 million flowers in bloom.  In cultivating its irises, the garden maintains technical ties with Nanjing and Wuxi in China.

I went to the garden with my friends Yasushi San and Hiromi San, for the first time.  At the entrance of the garden, there are souvenir shops selling biscuits, mochi and Japanese sweets in the iris shape.  We came at the Iris Festival time, so massive stands and nurseries were set up in the parking lots showcasing the varieties available.  On one side, an eatery with an orange plastic sheet screened out the harsh sun.  We set under the big orange tent enjoying our noodles, soba and curry rice.  Everything we ordered seem to have an orange hue!  Just when we got used to the strange colour, we made a move and stepped out to enter the garden.  Now free of the orange hue, everything seemed to be much bluer!

First we took a long walk along the path bordering the garden to take in a panorama of irises growing along the waterways in the centre of the garden.  The irises were classified and identified carefully with beautiful wooden labels written in Kanji (classical Chinese) and with Japanese pronunciation beside it.  We stopped and took photos at the platform on which wedding ceremony is performed every summer.  The newly weds will strode through the waterways in a boat in full Japanese wedding costume after leaving the platform.  It is romantic and historical.

We walked further to the embarkation place to board the boat for our little scenic cruise along the waterways.  The boats were tended by strong older women who were so friendly, even shared their freshly-boiled sweet corn with us.  There were beautiful irises in yellow, blue, purple and white.  Red, pink and white water lilies (30 kinds, 5000 plants) float on the water.

Further at the back of the garden, the China-Japan Amity Lotus Garden, the Lotus Aquaculture Pond, Water lily marsh, Water Park, swimming pool and athletic facilities for kids are situated.  These areas have the largest lotus collection in Japan.  Very rare kinds of lotuses such as the Chiben (lotus with many flower heads) can be viewed here.  The garden has more than 300 kinds of lotuses including a small lotus seldom seen in Japan.  Many of the lotuses have been donated by Nanjing and they bloom in white, red, pink and yellow during July and August.  Mornings are best for appreciating lotuses.  You can also try drinking Japanese alcohol using a lotus leaf as a utensil and drink through the long lotus stem.  This natural utensil is lovingly called the “elephant’s nose cup”.

In the centre of the garden, numerous bridges arched over the waterways for easy access and viewing of the beautiful irises.  There was a 100m wisteria pergola best for photos during late April and early May.  After viewing the garden, my Japanese friends bought several irises and I bought one for my friend Sawako San in Tokyo.  They were of exceptional beauty and unusual colours.

We took the bus back in town to view the historical buildings.  If you come by Sawara during the weekends (Fri, Sat, and Sun) between July 9-18, or the second weekend (Fri, Sat, and Sun) of October, it is the Sawara Matsuri.  Designated as the invisible cultural and social heritage of Japan, Sawara Matsuri in summer and fall show visitors the passionate side of the city.  Massive wooden carts decorated lavishly with themes from history, literature or legend, parade through the streets.  Traditional dance and musical performance make this festival a must-see.  The proximity to Tokyo city made Sawara a popular place to experience this 300 year old tradition possible as a day trip.