Experience a Thousand Year of History at Uji 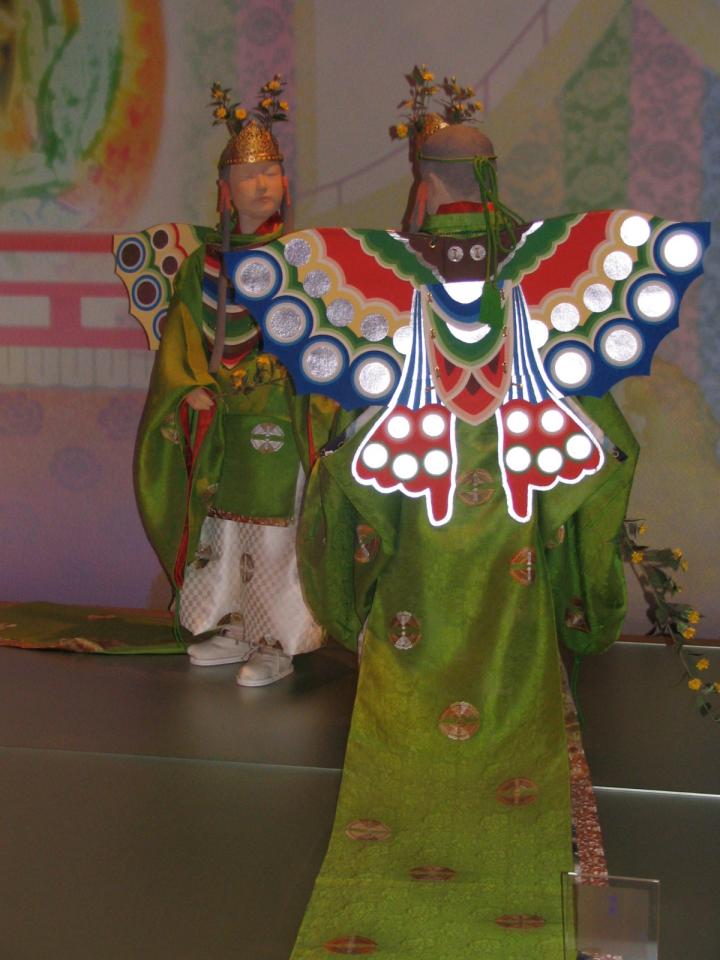 Court Dance, inside Spring Room of Tales of Genji Museum 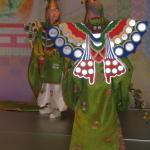 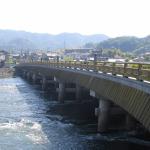 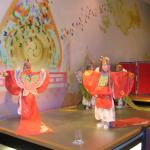 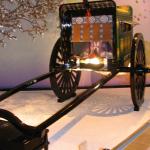 I slept well last night after the outing yesterday to Kurama Mountain and Inari Shrine in Kyoto.  I woke up at 10:30 in the morning and did not feel like rushing to several attractions in one day.  I walked over to a tsukemono restaurant near by and ordered a simple and delicious pickle on rice lunch.  The tsukemono set or tsuke sushi set were among the most popular on the all vegetarian menu.  Then I took the subway to Kyoto Station and got on the rapid train on Nara Line to Uji Station (15 minutes).

From Uji Station, I changed to regular train and reached JR Obakusan Station.  It was only a 2 minute walk to get to Manpukuji Temple.  Founded by a Chinese monk called Ingen in 1661, the temple was modeled after Chinese-style architectures and the large temple grounds almost feel as if I went to another country.  Ingen exported the prayer and ceremonial methods from the home mountain of the Oubakuso Sect of Buddhism.  Even today the monks adhere to a strict training regimen both day and night.  You can try the Chinese “sho-jin” cuisine (a vegetarian diet) from the food hall where a giant wooden fish is hanged.  Alternatively, come in a group and share the exquisite Chinese style vegetarian cuisine at Hakuunan.  www.hakuunan.com (5250-8400 yen per person) The vegetarian cold platter features seasonal greens and roots such as lotus, bamboo and plum with tofu and soy made delicacies.  There is tsukemono with rice, sesame tofu, steamed mushroom with ginko seeds, deep-fried tempura with different vegetables and tinted in various festive colours.  In a tatami room, the cuisine is shared among a group on a large table.  Finish the huge lunch with sweet tofu and salty sakura flower tea.  Known for being a quintessential Zen taste, “sho-jin” cuisine is also a healthy way to eat.

After, I took the JR train back to Uji Station and got a map from the information centre.  I then walked straight towards the Uji Bridge and crossed the Uji River to see Azumaya Kannon and Ochikata Shrine, turning right; I walked to the Tales of Genji Museum.  www.genji-daigaku.com (10-5, closed Monday)

From our 21st century, it is hard to imagine the life of Heian aristocrats 1000 years ago.  Tales of Genji Museum gently speaks of a time passed, reconstructs the life based on the story written by Murasaki Shikibu, a woman writer, during the Heian period.  It provides a glimpse into the luxurious court life, recreates the “Gissha”, Oxen-drawn Carriage, the 1:100 scale model of Genji’s Rokujo-In residence and several famous scenes in the final chapters of the Tales of Genji.

The “Spring Room” opens with the Oxen-drawn Carriage.  Only nobles could afford such an exquisite carriage drawn by a number of oxen with accompanying staff.  The second scene is the Butterfly Dance performed by two youngsters.  The beautiful costumes are gorgeously coloured.  The third set-up is the interior room of a court lady.  The private quarter is screened by a “Kicho” (mobile screen of beautiful drapery) and decorated with “Kou-no-karabitsu” (boxes with leg supports for storing costumes; incense was placed within to scent the costumes) and “Hitori” (vessel for burning incense).  On one side, a biwa (stringed instrument) and a koto (13 stringed musical instrument) are for the practice of “Gagaku” (court music developed since Nara period with Chinese and Korean influences).  Other than music, court ladies might engage in "Genji-kou”, a social game guessing the five kinds of incense, out of 25 parts in random.  Drawing vertical and horizontal lines on a piece of paper linking the 25 dots according to the same scent, the resulted pattern fits into one of the 52 patterns, each given a name after a chapter from the Tales of Genji (except the first and last).

Round the corner, there were the long murals highlighting the major events and characters in the story.  I entered the “Autumn Room”, it was a change of colour scheme.  Now it was more subdued and sadder somehow.  Here, the setting portrays one famous scene from the final 10 chapters of the Tales of Genji, the “Hashihime” episode where Kaoru (Genji’s son) sees the daughters of the Eight Prince for the first time and falls in love.  The life-size models of the daughters are wearing the formal 12 layered kimono costumes weighting about 16 kg.  I walked around the atmospheric hall with slides and lighting changes depicting various Kyoto landscape and seasons.

I entered the Audio-visual Screening Room (opens every 30 minutes showing a life-size marionette’s animation for 20 minutes long) by a bridge across the water with lots of mist around (dried ice or mist pump?).  The animation about the story of “Ukifune” (the “floating boat), the Tales of Genji’s final heroine, was accompanied by English through the headphones given at the information desk.  Try to put some tissue against your ears before putting on the headphones as they were not very clean.  The scene of Ukifune throwing herself into Uji River in a suicide attempt was unforgettable, combining real landscape and dramatic animation with Ukifune’s long untidy hair floating and stretching towards the underwater doom.  It lends an understanding of the politics and marriage for the polygamous Heian aristocracy.

I was thirsty after cleaning up my ears from the troublesome headphones, so I went to Café Hanachirusato in the museum.  Here you can order drinks with character names such as Genji (special coffee), Shikibu (black tea), Fujitsubo (orange juice) or Aoi (cocoa).  At the same time, I browsed the gifts and books inspired by Heian and Tales of Genji.  If you feel like putting on Heian costumes, Happy Day Rakuen near Uji River specializes in costume rental.  Alternatively, I went to Ujigami Shrine (World Heritage) and paid for a couple wish-fulfilling paper-cutouts (one in red and one in blue of human shape) and wrote my wishes and name on the back to pray for health.

I walked across the red bridge which means “morning dew” to the small island, To-no-shima, with a stone pagoda (Jusanju sekito).  I then continued to Byodoin Temple (World Heritage).  Next to the river, for lunch, there were numerous fine dining restaurants especially Hanayashiki-ukifune-en Japanese Restaurant and Kisenchaya with a Kaiseki menu.  At night, after 7PM, you can see Ukai (cormorant fishing) there.  A fire is lit on each fishing boat and trained cormorants dive to catch the fish, including ayu (sweet fish).  This amazing spectacle in summer is actually a very old style of fishing and appears in “Kagero Nikki” (one of the first ever diary forms of literature and written at the end of the 10th century also by a woman writer).  Around early April, when the cherry trees are in full bloom, take a cruise on a traditional wooden boat on the Uji River.  I stopped and rested for a moment at the municipal tea room (10AM to 4PM).  I bought a ticket from the information centre across (500 yen) and experienced Uji’s finest green tea ceremony from a tea master.  www.kyoto-uji-kankou.or.jp

Byodoin Temple www.byodoin.or.jp used to be a villa of Minamoto-no-Tooru, on whom the main character Genji was purportedly modeled.  The villa was inherited by the Fujiwara family and in 1052, Fujiwara-no-Yorinaga turned the villa into a temple and renamed it Byodoin which shows the finest example of Japanese architecture illustrating the Buddhist concept of the “western paradise” at a time believed to be the end of the world (coinciding the 2000 year after the death of Shaka Buddha).  Pure Land belief was popular among aristocrats and commoners alike at a time of political turmoil and rampant natural disaster.  The “Ho-o-do” (main hall) of Byodoin with its side buildings extended on an island above the small pond remains unchanged in the present and still overawes the modern-day visitors.  From the garden, enjoy thousands of 1 metre long wisteria flowers during late April and early May.  Take a glimpse from a small window opened of Amida Buddha who sits in the middle of Ho-o-do.  Otherwise, stand in line for a paid visit with a guide to the interior of Ho-o-do.  Not to be missed is the new treasure house (Hosho-kan) opened since 2001 showing the national treasures such as the 25 Bosatsu each playing a musical instrument as the retinue of Amida Buddha in the Descent of Amida.  I wrapped up my visit to Uji with a video at the Hosho-kan.  Through a special CG computer program, the original brilliant colours of Byodoin in Heian period were recreated showing the truly fantastic Byodoin justifiably as the western paradise on earth.