Living High in The Longhouse 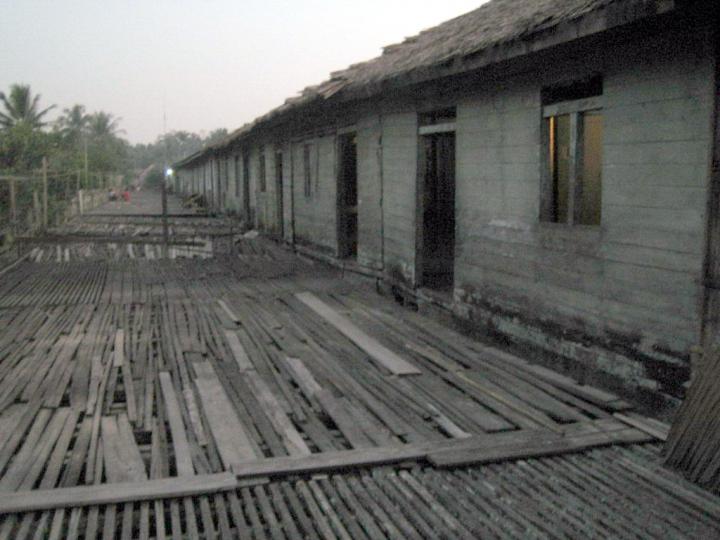 the terrace of the longhouse of the Dayak tribe 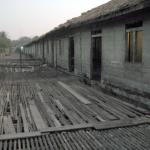 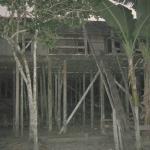 Can you imagine hundreds of extended family members live together under the same roof? That’s what I found on my recent trip to West Kalimantan, one of the five major islands in Indonesia. About three-hour drive from the capital city, Pontianak, there lies the legendary rumah panjang (the longhouse) in Pahauman, which shelter more than four dozens families. Rumah panjang is the traditional house of Dayak tribe in Kalimantan. Obviously, it isn’t for no reason that the house is called “the longhouse” because it stretches up to 186 metres long divided into fifty different cabinets altogether. What makes it even more unique is the fact that the entire house is designed for “living high”. It is built about three metres above the ground, standing upon rows of wooden pillars. In the past, the structure has protected the inhabitants from the attack of wild animals.

My friends and I had to drive through a narrow winding road for about an hour before we finally reached rumah panjang. It was almost dark when we arrived but the last evening light still lingering on the sky was enough to outline this extraordinary house and awed me. It seems floating up there above the towering dark columns. While wondering whether we would be allowed to go up, a middle-aged man appeared from inside the house and waved to us. “Come up,” he said, “Please, come up.”

I noticed that there were two kinds of stairs we could use to climb up. There is the ordinary one made of wood and another which is much narrower as it was made of a mere plank. The plank was scoped in places so as to allow one to place his feet there while climbing. I immediately thought that such a stair was only for decorative purpose and only changed my mind when a kid gave a voluntary demonstration that the stair was indeed functional. The secret is that you have to face sideways while climbing and have a very good balance, for sure. I opted to use the ordinary stair, both on my ways up and down “the longhouse”.

The man welcomed us warmly upstairs. He turned out to be ketua RT (the leader of the neighbourhood) of “the longhouse” and he also works as an artist. At first it was a bit unsettling for me to stand on the terrace of “the longhouse”. It was made of wooden planks and didn’t look secure at all. Some planks were missing here and there and whenever I stepped, I could hear woods creaking. Nevertheless, I saw children playing around merrily and I guess, it was proof enough that the teracce must be quite safe after all.

The house itself was built wholly on woods. Once I stepped into the door, I was in a long alleyway which served as a common room for the fifty families living in “the longhouse”. In the past all the living families should be related by blood but today the regulation had apparently been relaxed. The alleyway of “the longhouse” was dark and bare except for some bale (long wooden frames) here and there where people sat, talked and passed the evening together. Across the alleyway, there were doors leading to private cabinets and among them, there were also little shops selling food and daily necessities.

The ketua RT told us this is the last rumah panjang in the region. The others had unfortunately been either demolished or abandoned to ruins. I guess not many people enjoyed “living high” after all. Ironically, the ones left in “the longhouse” were mostly the less fortunate since the wealthy prefered to leave and buy their own house and land. The man then invited us to visit his cabinet which had been made into a showroom for his carvings. It was a nice, clean and well-lighted place. We admired his handycraft for a while and then one of my friends reminded the others that we had better leave while it hadn’t got too dark because we had to drive back through the street which provided no lighting at all. So, we said good bye to the nice ketua RT and climbed down. The light had vanished from the sky but I was simply happy to have my feet “down to earth” again at last.**