A Ride with Destiny 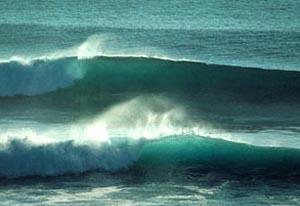 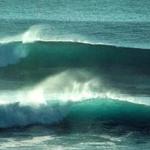 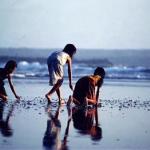 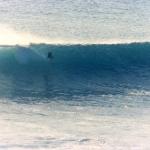 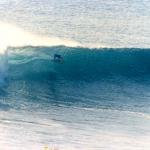 It is 1975. The Pan Am flight circles low around the Indonesian Island of Bali, as it makes its' final approach. This is the first time overseas for the young Australian, who excitedly peers through the grubby aircraft windows. The flight - direct from Sydney- is surprisingly empty, which is in sharp contrast to the crammed charters of later decades. Suddenly, he glimpses the rice fields, towering volcanoes and coconut trees that are synonymous with Bali. The plane sweeps so low, he can make out in the distance a Balinese fisherman wading waist-high in crystal clear water, casting his net into the sea. And from that very moment, Greg too is ensnared, the mystical allure of Bali casting a life-long spell. It was the start of a love affair lasting more than twenty years with the tropical paradise that enchanted him forever.

But Greg comes to Bali on a mission. The 23-year-old is here to surf. He is also here to shoot surfing film and photographs. His journey begins with the cult surfing film "Morning of the Earth," made by Australian film-maker and surfer, Alby Falzon. This film, shown worldwide to packed houses in the early seventies, perhaps single-handedly kick-started the phenomena of surfing in Bali and changed the Island forever. When Greg first saw the Balinese waves unfolding on the cinema screen in downtown Sydney, he knew that he was a lost cause. Around this time, surfing magazines also started to feature the hidden treasures of Balinese surf. And of course, there was word of mouth. From the 1960's onwards, there were a handful of international surfers - mostly from the US and Australia - who tried to keep Bali "their little secret." But talk of colossal, awesome waves, sultry climate, magical lands and dirt-cheap living could not be kept quiet for too long. Nevertheless, Greg and his peers were still some of the first waves of surfers, before the subsequent rush of thousands of Brazilians and Japanese got in on the act.

Armed with his photographic paraphernalia, Greg walks down the steps of the plane and into a cauldron. The suffocating heat almost burns the hairs in his nostrils. The airport is tiny as relatively few travellers pass through here and he claims his bags and surfboard straight off the searing tarmac. Before he can collect his thoughts however, he is whisked away by the ubitiquous bemo to his home for the next two weeks, Kuta. Kuta. It's hard to imagine now, but this chaotic, sprawling beach town was very different back in 1975. Then it was just a laid-back, affable community with the odd hotel, losmen (simple, family-run accommodation) stores and temples and warungs (corner snack bar). Carpets of coconut trees blocked your route. They also lined the pristine, sweeping stretch of staggeringly gorgeous beach. The noise level encountered was the surf crashing down on the soft sand. The privileged few enjoying its virginal forms on the bygone six-month visas were travellers on the hippy route between Australia and Europe. Kuta was one of the legendary three "K's," the others being Kathmandu and Kabul which were a pre-requisite on any hippies must-see list. And of course, the steady trickle of surfers like Greg, who wanted to see for themselves if Albys' celluloid wasn't just an unattainable fairy tale.

But this morning is a severe culture shock. On an unsealed and dusty road, a bumpy ride is endured narrowly missing dogs and chickens roaming freely. The cramped bemo drops him off at the losmen where fellow Australian friends are already installed. This is a no-frills establishment, one of a growing number catering for the rising number of travellers. Consisting of a basic room with twin beds and concrete floor, there is no electricity. Come night time, gas lamps are used and there is no such thing as air-conditioning - let alone fans -to keep cool in the stifling heat. Inquiring upon the whereabouts of the bathroom, he is led to an outer room. There is a crude water tank and two wooden slats flanking a hole in the ground - the infamous squat toilet. Greg nervously looks for the toilet paper, but he is advised to use the plastic scoop provided and his left hand; the right one-his friends point out- is for eating. There is no running tap water, instead this is collected daily from the communal well and naturally has to be boiled before consumed.

Greg is fascinated. By the time his bags hit the floor, he is off exploring Kuta; ever the curious voyeur, he takes his camera. It is like opening Pandora's Box and he feels like a child in Wonderland. From the losmen there are a series of shady, coconut-lined paths strewn with frangipanis that in no time lead to a tangle of identical gangs (narrow alleys). Their high, coral-clad walls hide family compounds, creative workshops and religious quarters. Peeking through the open wooden doors, a secret world is revealed. Young girls practice traditional dance routines to the sound of the gamelan. Offerings to the Gods of fruit and rice - wrapped in banana leaves - are laid out beneath Hindu statuettes. An all-pervading smell of aromatic cloves hangs heavily in the air. This first encounter for Greg captures not only the charming Balinese on film, but also his very soul. Inspired by what he witnesses here, the young man subsequently continues a lifetimes' odyssey, roaming the world and taking photographs of different cultures and surf.

Lost it seems for hours, he is bought back to reality as soon as he manages to stumble home. His surfing mates tell him to wax his board pronto as the swell that day is perfect. With not a minute to loose, they head off straight away to the decisive surfer's paradise- the waves off Ulu Watu, where some of the most breathtaking surf in the world can be found. But first obstacles have to be overcome; like some precious Holy Grail - the exquisite prize rewarded after the arduous quest. Rented motorbikes are the most convenient form of transport, but even this is a death-defying feat. Driving two-wheeled transport along pot-holed roads with trucks heading straight at them is dangerous enough. But the surfboards are slung precariously to the side of the bike and if the wind gets up they and the passengers are in danger of being blown over to Lombok. Very soon, Kuta and its' environs are left far behind and grazing land, plantations and coconut tree jungles are all that keeps them from the Western coastline.

At the mystical Ulu Watu, - an open-air clifftop temple and nowadays Bali's top tourist destination- there is not a soul around. Apart from, that is, an epidemic of monkeys surrounding the temple, keeping guard. Nearby is an overgrown path, which heads down towards the sea. Local children clamber round Greg and his friends and for a small fee offer to carry the surfboards down to a cave. To access the waves, the surfers must drop down onto the sandy cave floor. At its' opening a few paces later, the tide rushes through the narrow gap of the cave walls. The only way out to sea is paddling through on surfboards, skilfully negotiating a jagged coral pinnacle-head just to the right of the exit. There is more to come. Greg learns that there are man-eating sharks, poisonous sea snakes and sea lice lurking in the water, as well as a strong rip undertow. Yet as he experiences the thrill of Ulu Watu's legendary surf, all this is worth it. Some of the most powerful and solid waves in the world, they are ten feet tall and roll flawlessly along for seemingly forever, keeping their shape and momentum. The perilous coral reef - that with one wrong turn of the board rips your skin to shreds - is ironically the very factor that contributes to their perfection. When Greg first approaches these waves he is simultaneously awestruck and scared out of his wits. They are unlike anything he has ever encountered before and this is literally the ride of his life. There are just a handful of surfer's here; graceful and stylish figures. Very much out on their own, they are willing to risk their lives as they master the explosive breakers in unison. It's addictive stuff and this is the first of many blissful days surfing here and on the beaches of Kuta and Sanur. During the 'seventies and 'eighties, Greg makes over fifteen return visits to Bali, sometimes staying for months. The passion and desire to relive again and again the ultimate experience comes above all else.

But every idyll has its curse and Bali is no exception. Sanitary conditions are not good and unused to the local cuisine and water, it is only a matter of time before Greg falls victim to the infamous "Bali Belly." No one escapes the islands' wrath; the only Western doctor is on the East Coast - at Sanur - and might as well have been in Australia. On daily surfing excursions, there is always someone laid up in bed; too weak to reach the door to say "not today boys, it's not been a good night" as the surf patrol roars off into the distance.

From very early on, Greg forgets home comforts and goes native as if it's second nature. He takes to wearing hand-made batik sarongs. He is befriended by the losmens' resident family, who each morning perform the daily ritual of bringing him tea in thermos flasks and bananas. The young daughters endearingly hold his hands as they ask him if he slept well. He always replies "yes. " After a hard day on the surf, he pays for soothing evening massages as the sun sets. After a delicious meal rustled up by nearby warungs, he and his friends retire early to the repetitive sounds of frogs and crickets and the distant drone of a motorbike. In the early days, there isn't much nightlife to speak of; besides it's an obligatory early rise for the next day of catching waves.

Many years, rolls of film and airline flights pass and Greg has his last tour of Bali four years ago. By this time, much has changed in Kuta and the place is almost unrecognisable. Designer shops and hamburger joints replace coconut trees and Western music blares out from bars serving gross-named cocktails. International hotels and resorts dwarf the losmens of yesteryear. Amongst the surf, a multi-cultural army decked out in a uniform of Billabong and Hot Tuna now jockey for position, in what is regarded as one of the premier surfing destinations in the world. Surfing is now big business and a highly commercialised, well-oiled enterprise not just here, but worldwide. But Bali still maintains its beauty and tranquillity. Greg knows that he is a lucky man to be here at the beginning of it all. The vivid memories of those pioneering trips will never dim. They cling hard and stubborn like the nimble feet on his surfboard, that first magical morning when an ecstatic young Australian tamed the wild waves of Ulu Watu.

Along the Perfume River