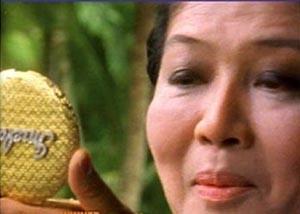 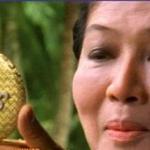 Mention the name Imelda Marcos and, predictably, the first response is...SHOES. Shoes, shoes and more shoes, size 8 1/2. So many, they fill a museum in the town of Marikina, the shoe manufacturing capital of the Philippines.  Although, in her own defense, Imelda says, "I did not have 3,000 pairs of shoes. I had 1,060." Regardless, as Imelda: Power, Myth, Illusion artfully reveals, Imelda is so much more than the shoes.
Born on July 2, 1929, into the powerful Romuáldez clan, Imelda was the daughter of Vicente Orestes Romualdez, a scholar, and Dona Remedios Trinidad, a dressmaker. Imelda attended St. Paul's College, where she earned a bachelor's degree in education. At age 18, she won a local beauty pageant, in which she was named the 'Rose of Tacloban', and went on to compete in the Miss Manila pageant. Her complaints at being named second runner up prompted the mayor to name her the 'Muse of Manila'. One anecdote recounts an incident in which she sang 'God Bless the Philippines' to the tune of 'God Bless America' in the presence of the composer himself, Irving Berlin. He was so disturbed a the notion of her musical adaptation that he composed 'Heaven Bless the Philippines' just for her.
The following year, Imelda was introduced to Congressman Ferdinand Marcos, and after a whirlwind courtship, they were married. Together they had three children, Maria Imelda 'Imee' Marcos; Ferdinand 'Bong Bong' Marcos II, Irene Marcos; and one adopted daughter, Aimee. Theirs was a romance played out in the media, and by the time that Ferdinand was elected President of the Philippine Republic in 1965, the nation was in deep turmoil. Marcos declared martial law, and Imelda assumed various political roles, many created and appointed by her husband, including Governor of Metropolitan Manila; Member of the Interim Philippine Parliament; Minister of Human Settlement; and Ambassador Plenipotentiary and Extraordinary, a fancy name for 'diplomat'.
During her years as First Lady of the Philippines, Imelda Marcos met with nearly every political leader and dignitary on the planet, playing a significant role in strategic international negotiations. On the domestic front, she spearheaded the construction of the Cultural Center of the Philippines, the Philippine International Convention Center, the Folk Arts Theater, the Philippine Heart, Lung, and Kidney Centers, and the controversial Manila Film Center, which is said to be haunted by the souls of several construction workers who were killed in an accident on the job site and engulfed in its concrete foundation.
Throughout the reign of Ferdinand and Imelda Marcos, the couple existed at the center of a financial maelstrom, in which they amassed a huge personal fortune, allegedly funded by the Philippine treasury. They bought priceless works of art, untold amounts of precious jewels, and some of the most valuable real estate in the borough of Manhattan. Of course, as representatives of the people of any nation, we want our political figureheads to be stylish and well-turned. But just how much is too much? At what point does the luxury of office cross the line and become exploitation to excess? Certainly at $35 billion!
The Marcos bubble burst in 1986, when the four-day People Power Revolution saw Corazon Aquino, widow of Senator Benigno Aquino, Jr., elected president. Aquino was recognized by the United States as the official leader of the Philippines, and Ferdinand and Imelda Marcos were ordered to step down. They fled to Hawaii, with Imelda frantically packing 'diamonds and diapers', diapers for her grandchildren. The Marcos estate was ransacked by looters, and one of the new regime's first official acts was to create a commission to investigate the Marcos financial empire.
Ferdinand Marcos died on on September 29, 1989 in Hawaii, and for two years, Imelda was barred from returning his remains to the Philippines, until the Philippine Supreme Court ruled in her favor. The body of Ferdinand Marcos was laid to rest in the Philippines in 1991. Imelda went on to run for public office, finishing fifth in the 1992 presidential race, and later elected congresswoman of her home province. Two of her children, Ferdinand, Jr. and Imee, have served as governor and congresswoman.  Investigations into the Marcos fortune are still in progress, although many of the charges have been dismissed.
Imelda: Power, Myth, Illusion is a fascinating glimpse into the history and psyche of the world's richest and most notorious first lady, featuring footage of interviews with those who knew her best, as well as intimate interviews with Imelda herself, including a lengthy explanation of the philosophy of her book The Circle of Life.  And for all her narcissistic shortcomings, the result is a nicely balanced view of a woman who faced the slings and arrows of public office, and somehow in all her excesses, sincerely believed that she had the best interest of her people at heart.  "I had to be both star and slave," she says. "A star for the poor, and a slave to everyone else."
* * *
Imelda: Power, Myth, Illusion is available on DVD at Amazon.com.
* * * * *