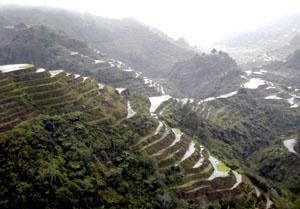 The spectacular Banaue rice terraces rise like giant steps to the sky. 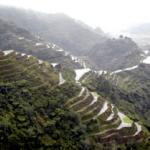 BANAUE, Philippines, Feb 26, 2003 - They are starkly embossed on peso bills and are a major tourist attraction, and yet the spectacular rice terraces north of the Philippine archipelago have been taken for granted by Filipinos.

Spanning 20,000 hectares (49,400 acres) along the Cordillera mountain range in Luzon island, the functioning paddies had been painstakingly carved out from harsh terrain with primitive handtools by Ifugao tribesmen thousands of years ago. Experts say the imposing landscape, which draws awe-struck tourists daily, is a living testament of engineering and creative genuius.

But neglect and environmental degradation have cast a cloud on the future of these world-famous structures, which rise majestically from the bottom of the valleys to about 1,000 metres (3,280 feet) and higher into a so-called "Stairway to the Sky." The terraces are rapidly deteriorating even though they have been on the "World Heritage" list of the United Nations Education, Scientific and Cultural Organization (UNESCO) for the last eight years, officials say.

The damage is most telling in areas around the tourist town of Banaue, some 330 kilometers (204 miles) north of Manila and among 11 municipalities making up the vast Ifugao province housing some of the ancient terraces. The thick upland forests protecting watersheds that nourish the terraces are being depleted, eroding the soil. This makes irrigation systems, and effectively the paddy fields, less efficient, laments Ifugao governor Teodoro Baguilat. There is also uncontrolled construction of shelters on the rice terraces which are increasingly going untilled by the younger and less tradition-bound Ifugaos who instead get jobs abroad or make a fast buck as tour guides and mini-bus drivers, he said.

The destruction of the terraces has been so rapid that UNESCO has relegated the structures from the "world heritage list" to the "list of world heritage in danger." Some environmentalists say nearly half the terraces have vanished. UNESCO has warned that this most extraordinary system of rice terracing must be restored within a decade or their "world heritage values may be lost." The UN agency has mandated governor Baguilat to manage the terraces until a permanent authority is set up to protect them.

Baguilat is revising a previously-devised master plan to rehabilitate the terraces at an estimated cost of about two billion pesos (37 million dollars). The plan, he said, includes protecting the culture and the environment, restoring watersheds, improving irrigation and tapping new energy sources, beefing up transport, exploiting tourism potential and uplifting the livelihood of the local people. "First we have to consult the local community because what we want to restore is the total cultural landscape -- not just the rice terraces but almost everything that go with them, like the rituals that have been passed down by generations, " Baguilat said.

His office wants to sponsor the revival of Ifugao rice planting rituals that have not been performed for decades. Soon, for a fee, tourists could sport g-strings and join the Ifugao farmers in rituals "to get them more involved in the restoration process. "The physical erosion of the terraces is the tangible effect but what is also significant is the erosion of the cultural values," Baguilat said. "Indeed, the people themselves are beginning to realise that they may have taken the rice terraces for granted."

The terraces which would stretch half way around the globe if laid end to end, are not the product of enforced labour and are built without any foreign influence or intervention, Filipino conservationists say.

Governor Baguilat makes frequent trips to Manila to ask potential donors to see first-hand the situation on the rice terraces so they could identify which restoration component they could "invest" in. Through such "investment matching expeditions," the provincial government can receive assistance, including technical or training expertise, to supplement funding from the government and UNESCO, he said.

Tourism Secretary Richard Gordon said the key problem was not funding but getting the younger Ifugao generation to return to their farms. "To do this, we have to firstly convince them there is a future for them in the terraces and secondly we have to fill in the generational technological gaps," Gordon said. "This requires a local solution." But how would the younger Ifugaos return to rice farming on the terraces, where yield has been inadequate? "We have to find other sources of income for them," said governor Baguilat.

Rice grown in the terraces follows the traditional once-a-year harvest and is inadequate to feed the thousands of farming families living there. "We cannot pretend that it is not productive as a farm," said President Gloria Arroyo after a recent visit. "We have to recognise it as a cultural heritage."

Jason Tindungan, a 27-year-old mini-bus driver in Banaue and among the younger Ifugaos who have lost their links with the terraces, said he returns to his traditional farm only once a year during the harvest. "This is for the customary family reunion," said Tindungan, who according to Ifugao tradition will inherit the farm as he is the eldest son. "I will probably lease the farm, now managed by my grandma and sister, when I eventually own it," he said.

At a rice terrace located in a typical Ifugao village near Banaue, Valentina Nabon, 32, said crop production is not adequate to meet the needs of the 24 families living there. "I have to sell handicraft to tourists to feed my family of seven," said Nabon, as she adorns herself with a rattan headband affixed with chicken feathers and the head of a hornbill as well as necklaces made from snake bone, wild boar teeth and the skull of a baby monkey. "We wear this for good luck," she said as children and chickens frolicked under the small Ifugao houses -- pyramid-shaped, grass-thatched huts on stilts. "With hard work and some luck, we can restore the terraces and regain the pride of our forefathers."